Getting from Paris to Milan (& vice versa) 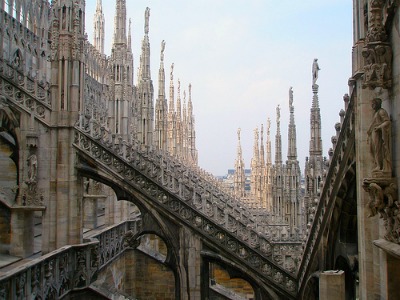 While Paris is on almost everyone’s must-see list, Milan is not. One major reason one might head for Milan after Paris – aside from the fact that both cities are fashion and shopping capitals – is that Milan is a major transportation hub and, therefore, a gateway to the rest of Italy.
Milan is about 400 miles from Paris as the crow flies, and flights are actually fairly short between the two cities. You do have a few options for getting from Paris to Milan (or from Milan to Paris, if you’re headed the other direction), and the fastest way may not be the best one for your travel style and budget. Check out the information below in order to make the best decision.
Need to know how to plan your stop in Milan? Look no further than this Milan travel guide.
Note: This information is presented as if you’re starting in Paris and going to Milan. The same information will work if you’re starting in Milan and going to Paris. Travel times and ticket prices will be the same, you’ll just need to confirm departure times and stations.

Flying from Paris to Milan 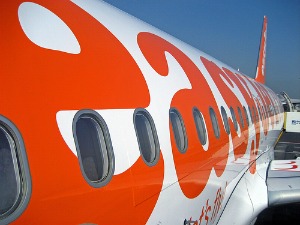 Finding a super cheap flight to Milan from Paris is definitely appealing – less than €15 one-way?!? – and even with all the extra fees and whatnot that airlines like Ryanair add to their shockingly low base fares, the cost of an airline ticket may still be far cheaper than a train or bus ticket. Another thing to keep in mind, however, in addition to cost, is location of the airport. Ryanair in particular loves using airports that aren’t exactly central. Beauvais in Paris and Orio al Serio in Milan aren’t really “in” either of those cities, so look up the transportation situation (cost, distance, time, etc.) from each airport into the cities to see whether you’ll actually save money or time by flying.

Taking the Train from Paris to Milan

ShowBookingWidget();
Ordinarily, the train is one of the more popular methods for getting from place to place in Europe – but when you don’t have unlimited time, longer train trips may not be the ideal way to go.
The fastest train journeys between Paris and Milan take about seven hours one-way. Overnight trains on Artesia can take more than 9 hours one-way, but at least then you’re not sitting on a train during a whole day when you’d rather be sightseeing. The night departures leave Paris at 20:33, arriving in Milan at 05:38. Otherwise, you can take day trains that leave Paris at either 07:24 (arriving in Milan at 14:50) or 15:24 (arriving in Milan at 22:25).
Ticket prices range a great deal, from €60-100 in 2nd class (and that’s without a bunk in a couchette) – this is absolutely a time when using a travel day on your Eurail Pass will save you money. If you’re doing an overnight trip, it will save you even more – departing after 7pm on a direct train means you’re only using one travel day instead of two. (Plus, you don’t have to pay for lodging that night, either.)

Driving from Paris to Milan

The trip from Paris to Milan is about 530 miles by car, which is a journey that will take more than eight hours (barring any traffic issues, stops, or wrong-turns). It can be a beautiful drive, and if you love road trips and don’t mind a long day in the car it can be a great way to go. It’s even better if you don’t absolutely have to be in Milan that day and can stop in a town along the way if you like. Remember that not only will gas be a cost to factor into driving, paying the tolls along the way will, too.
Whatever your route, and however long you take for the trip, it’s a very good idea to look up a suggested route on a map before you leave (the ViaMichelin.com site is good for a starting point) and then to have a GPS unit in your rental car and a good driving map with you. You can usually pick up better (more detailed) driving maps in-country than you can find at travel stores at home.

Taking the Bus from Paris to Milan 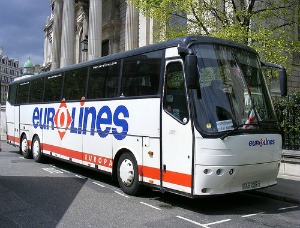 Although traveling by bus within France can be complicated to figure out, traveling by bus from France to another country is much simpler. Eurolines is a conglomerate of several European coach/bus companies, and it connects major cities throughout Europe – including Paris and Milan.
A one-way ticket on Eurolines from Paris to Milan is as little as €25-35 in the low season when booked in advance, but the trip is more than 15 hours long. The bus is budget-friendly, but it’s not very time-friendly at all.
photos, top to bottom, by Stefan Karpiniec, WexDub, sludgegulper