Getting from London to Paris: A run-down on the 5 options

Whether you are kicking off your Europe backpacking trip in London, found a way better deal on a flight through London isntead of the French capital, or are just planning to include both of these cities in your Euro-trip – you have several options for how to cross the English Channel and travel between these two major European metropolitan areas. 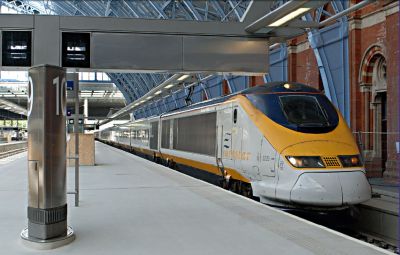 Although taking the Eurostar train between Paris and London via the Chunnel (the underwater tunnel underneath the English Channel) is usually not the cheapest way to travel between London and Paris, it is certainly the fastest and most convenient (the journey only takes 2.5 hours). The Eurostar leaves from the center of London and arrives at the Gare du Nord in the center of Paris (check out hotels around the Gare du Nord). This means no hassle in getting to/from the train on either end of the trip.

When buying your Eurostar ticket, you will also be offered First and Second class options. First class fares include complimentary drinks and meal, but much like First Class on airplanes, the slightly bigger seats and free meal is hardly worth the extra money for a relatively short journey. Unless you have extra cash to burn, stick to riding in the 2nd class cars. Plus, all passengers have access to a bar car serving drinks and snacks.

Although airlines like Ryan Air offer some pretty fantastic looking fares for flights between London and Paris, keep in mind that airports are not located in the center of these cities. This means you’ll have to take into account not only transportation costs to and from the airports in both cities, but also time and hassle. By the time you factor in these logistics, the Eurostar train fares may seem to be a way better deal than before.

The Eurostar is also a high-speed train, so the whole journey from London to Paris is over in a few short hours. Plus, while you’ll be in darkness while you are traveling underneath the Channel, the pastoral views of southern England and northern France are beautiful and provide travelers with interesting (and very green) scenery to enjoy as the train speeds by.

Remember that while you don’t need to arrive hours before your Eurostar train like for an airplane, it is important to arrive at least 30 minutes before departure to allow for check-in.

Book your tickets in advance

Here’s a time-lapse video of the Eurostar trip from London to Paris: 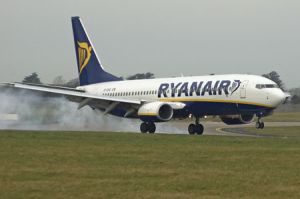 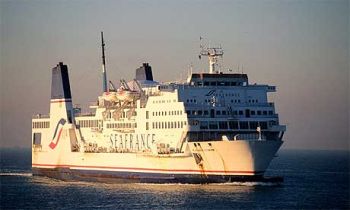 Although the completion of the chunnel stopped most people from traveling by ferry between the UK and France, those with time to spare can still get from London to Paris by way of train and boat (you have to purchase the tickets separately).

However, the journey is much longer (about 9 hours), so it is definitely not the way to go if you’re on a tight schedule. This option also can cost more than the Eurostar, but those who chose to take the ferry will have a unique and exciting travel experience (and avoid the underwater Channel tunnel if it freaks you out too much).

Ferries between the France and England sail from the scenic White Cliffs of Dover, which is a sight in and of itself. While the journey can be choppy, windy and cold in the winter months, you’ll get to enjoy the rugged scenery of the French and English coastlines.

Here’s how you’d go about taking a train/ferry combination from London to Paris:

Check UK train times & fares at www.nationalrail.co.uk. Allow at least 65 minutes in Dover, preferably a bit more, between your train arrival and planned ferry departure, as there is a 45-min check-in for the ferry. Just buy your London-Dover train ticket at Charing Cross station on the day of travel, no advance reservation is necessary or even possible, you buy a ticket and hop on.

On arrival at Dover Priory station, take a bus (£2, every 20 minutes), taxi (about £4) or a long walk (around 30-40 minutes) to Dover Eastern Docks where the P&O & SeaFrance ships leave, or walk (20 minutes) or taxi to the Speedferries terminal.

Step 2: Sail from Dover to Calais by ship. The traditional option is to sail from Dover (Eastern Docks) to Calais on a ship run by either www.seafrance.co.uk or www.poferries.com. Ferries sail every hour or two, crossing time is 1 hour 30 minutes. You can book online in advance or just buy a ticket at the port, there are almost always places available. While those hoping to have a futuristic voyage across the Channel will be disappointed, it is no longer possible to cross the Channel by hovercraft, as the company Hoverspeed stopped all their Dover-Calais sailings in November 2005.

The ferries arrive at Calais Maritime ferry terminal in France. If you have a backpack or other light luggage you can walk across the now-reopened footbridge into town. It’s a 10 minute walk to the market place in the town center, or a 15 minute walk to Calais Ville station. If you have heavy luggage or cannot walk far, take a shuttle bus from the ferry terminal to Calais Ville station, the bus fare is £1. Make sure you allow at least 60 minutes in Calais between the ferry arrival and the departure of the train to Paris. 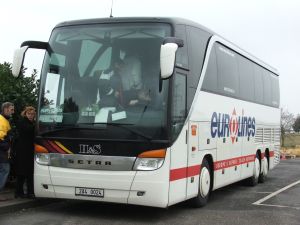 Those looking for the super budget option for traveling from London to Paris can also take a bus between the two cities. Buses run between the two cities, passing through the chunnel. While taking a bus may be the cheapest way to get between London and Paris, it is certainly not the fastest way. With the Eurostar high speed train whizzing you from London to Paris in just 2.5 hours, it may be hard to swallow the 9-10 hour long bus ride. That being said, if you have a lot of free time and not a lot of cash, this is definitely the least expense way to travel from London to Paris. Fares for buses (or coaches as they’re called in the UK) start at just around £15 (under $30), which is certainly much less than you’ll spend on a Eurostar ticket, which can run for as much as $100 or more one-way.

>>If you do decide to bus it from London to Paris, the Eurolines web site is a great way to find great fares on bus routes all over Europe. 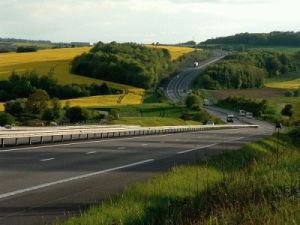 Driving is definitely not the best or easiest way to get from London to Paris. Not only will it take you a whole lot longer than flying or traveling by train (the drive takes 7-9 hours), but you’ll end up spending as much if not more for transporting your car through the chunnel or across the channel by ferry. In addition, because the Brits and French drive on opposite sides of the car/road, any rental car you pick up in London will probably not be great to have in France. You’ll also have to pay fees to get your car through the chunnel (usually about £50 each way) or on a ferry to cross the Channel.

The major highways into Paris are A1 from the north (Great Britain and Benelux); A13 from Rouen, Normandy, and northwest France; A10 from Bordeaux, the Pyrénées, the southwest, and Spain; A6 from Lyon, the French Alps, the Riviera, and Italy; and A4 from Metz, Nancy, and Strasbourg in the east.

Keep in mind that traffic in both London and Paris can also be quite horrific, so you might be better off hopping on the train or bus and avoid getting in the car altogether.

>>If you do decide to drive, visit the eurotunnel.com for more info