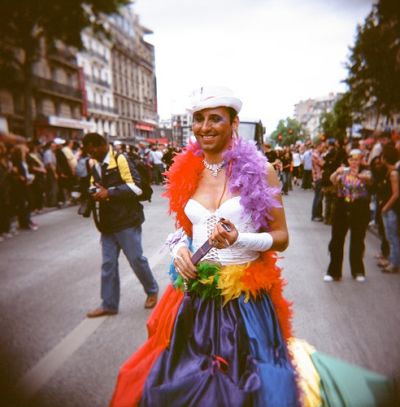 Paris has often been called the most romantic city in the world, and keeping in line with its theme as a city of love, each year at the end of June Paris celebrates all kinds of love with its Gay Pride parade. One of the most popular gay and lesbian event in the globe, the massive parade draws more half a million spectators and participants, who flood the streets of Paris donning elaborate costumes, body paint and riding on huge decorative floats. Along with the events on parade day, there are also a series of parties, balls and performances that happen alongside this colorfully entertaining event.

For those who have been to any major gay pride event in cities in the U.S. can generally know what to expect out of the gay pride parade in Paris. However, add into the mix the even more relaxed attitude towards sexuality in France along with their own unique sense of theatrics and drama and you’ve got yourself one hell of a party/show.

The parade traditionally goes from the Republique to Beaubourg via the Marais (the gay district in Paris and my favorite shopping area), though the exact route is not announced each year until almost the last minute. It is hard to miss the parade, however—just follow the loud music, blowing whistles and colorful balloons that surround the parade route for miles. 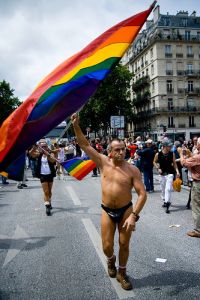 Paris has a large gay and lesbian population, and with one of the most liberal attitudes towards sexuality not only in France, but also in Europe, it is no surprise that the City of Lights draws eclectic, free-spirited and enthusiastic crowds of spectators and participants each year.

While the parade is certainly one big party, it also serves to bring awareness to equal rights and along with plenty of outrageous costumes, music and partying until the wee hours, there is also a strong political message in favor of equal rights for the LGTBQ community.

In a procession of color, gaiety and fun along the streets of the capital, the now legendary “Marche des fiertés lesbiennes, gaies, bi & trans” proclaims its protest message against all forms of discrimination, and in favor of equality and putting an end to homophobia, lesbophobia and transphobia. 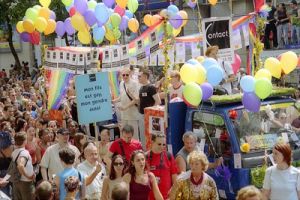 The big day itself is the culmination of a series of events, including debates and masked balls, with special Pride related parties at Paris’ many clubs. Not sure which clubs you should hit up? Check out this post on where to go clubbing in Paris for some ideas. For those that enjoy clubbing in Paris, the special pride related events are guaranteed to be wild and always interesting.

Clubs like Le Queen, Le Soir, Le Club 18 and others all hold special events—some of which require cover charges or pre-bought tickets, others which don’t.

Partying usually spills out into the very queer-friendly Marais district, where cafes, bars and clubs often offer dinner and drink specials for the occasion.

With so much to do and see in the City of Lights (and the rest of France for that matter) before the town is covered with the Rainbow, you certainly won’t be bored during June in France (or June in Paris) before the parade kicks off.