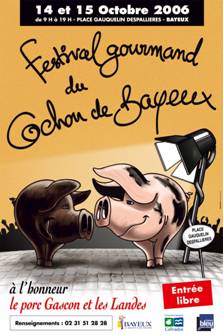 No one would disagree that the world would be a pretty dismal place without French cuisine, but last February President Nicolas Sarkozy came up with a brainstorm:

Why not declare French cuisine a UNESCO World Heritage ‘Bite’? Well, he didn’t use those words – exactly, it was more modest: “We have the best gastronomy in the world — at least from our point of view. We want it to be recognised among world heritage” The idea has also been pursued by top French chefs and the French Senate – and is now up for consideration by UNESCO – which conveniently happen to have offices in Paris. Sounds like plenty of opportunities for UNESCO people to run around to top Parisian restaurants for a bunch of great meals before deciding if this project has merit.

After having tried some of La Belle France’s signature dishes and products – you remember how I raved not so long ago about Les Saucisses de Morteau (and their annual sausage festival), I have to agree that French Cuisine has to be one of the most versatile and varied world cuisines. You could eat a different French cheese every day of the year – and still not try them all. Sauces vary from region to region, ranging from the cream-based sauces in Normandy to Provence’s tomato-based sauces with a hint of garlic. The simplest sauces demand the most deft handiwork to make vinegar, cold butter and shallots whip up into a delicious sauce au beurre.

But, then again, as much as I enjoy French cuisine while in Paris, is it really correct to claim (or think) that “We have the best gastronomy in the world!”?

Here is Parisgirl’s humble opinion: Let’s not forget that Europeans went out of their way to bring back spices from the Middle East and Asia as far back as the Crusades. Did they go all that distance – and not bother to ask for a recipe or two? Even one of the dishes mentioned in the discussion about declaring French cuisine as a World Heritage treasure was a dish including vanilla – the vanilla bean comes from island nations that had been once been France’s colonies. Some favorite Parisian dishes – such as ‘cous-cous’ originate in North Africa.

Think of the time and effort some Indian cooks put into meal preparation – getting up at 5 am to prepare their fresh dahl – the vast number of Asian spices that are just beginning to find their way into Western cooking. Think of the hundreds of different varieties of kimchee in Korea.

These are some of the reasons I think it would be presumptuous to assume that French cuisine is ‘the best gastronomy in the world’. The enjoyment of food is an extremely subjective and personal experience. Each person’s tastebuds experience food in a slightly different way. Not everyone is going to love fermented fish or even a creamy Camembert. Why should we create labels for the ‘best’ when not everyone could or should agree on a set definition for great cuisine?

However, I do totally agree with the idea of safeguarding the ‘how-to-aspect’ of traditional cuisine, be it French, American, Korean or Tongan.

You’ll note in France, there’s been much attention paid recently to the preservation of various species – for example the black and white ‘Cochon de Bayeux’ or the Bayeux Pig is one example. This pig is even represented (and protected) by a ‘Cochon de Bayeux’ society of guild ‘Les Confreries de Cochon de Bayeux’ who are partly responsible for keeping this species in the public eye – and on the table in France.

With the expansion of housing throughout France – and the reduction in small farms, many unique species found in the French countryside could be at risk from lack of interest, lack of free-range, or lack of commercial demand. Today, even finding a good farmstyle Camembert is nowhere near as easy as it used to be a decade earlier.

So, in this sense – a World Heritage label MIGHT help, if it allowed for traditional farmers in small Mom & Pop operations to compete against larger cultivators. But, what does that say to the rest of the world’s great cultural cuisines? Perhaps UNESCO, rather than designating a specific cuisine as a Cultural Heritage treasure, should create a MEGA WORLD COOKBOOK with a website listing where you can find the best ingredients in their natural state, the best livestock, the most competent chefs, etc.

When it comes to food, we are one world with a great appetite for good things.
19th-century food writer Brillat-Savarin wrote: “The discovery of a new dish does more for the happiness of the human race than the discovery of a star.” France can definitely be a leader in showing us the way to appreciate great cuisine simply by taking the time to sit down with family and friends and taste the fruits of our labor.