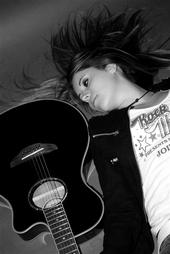 For whatever reason, even though American singers can have a big following in France, female vocalists from the ‘Hexagone’ don’t get much exposure in the U.S.

That’s why I consider myself lucky to be sitting here interviewing a bona fide rock/pop/folk vocalist who, writes and composes her own music and with French AND English lyrics. She may not yet be in the headlines, but if you visit her Myspace site and catch some songs from her upcoming album, I think you’ll agree that she has an authentic sound – and her lyrics come straight from the heart. So, let me introduce you to LN!

We’re actually sitting in a Montparnasse coffeeshop – not one of the fancy ones on Boulevard Montparnasse but a more ‘economic’ ‘fast cafes’ where the coffee comes in plastic cups at the Centre Gaite. You don’t need ambiance when you’re talking to LN. Just say the word ‘music’ and she’ll start talking a blue streak.

LN: French ‘variete’ singers simply haven’t progressed. You take some of the French singers that I grew up listening to and you don’t see much evolution. There’s a lack of dynamism and originality. When a female vocalist is successful, she might produce two or three great albums and then slip into commercialism (not only in France, but I can think of a few examples in the UK as well)

That being said, take Lara Fabien, Isabelle Bouley, Maurane, Mylene Farmer, Patricia Kaas – they have great voices . . .You could say that I started off by listening to them – but then I wanted to find more originality. And felt handicapped – it wasn’t until I started exploring rock and folk, that suddenly things clicked.

You see, for me, the music that we listen to influences the way we live. If you wake in the morning to a sad song – you don’t start your day in the same way. My quest has been to create a music that defines my personal universe. Not only that, but writing words and music has allowed me to express myself. 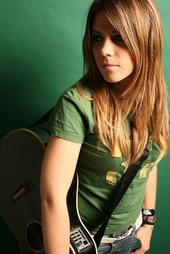 ParisGirl: Which brings us to the song ‘Lost’ which I admit really hit home. You know, I really felt as if I was in your shoes when you sing that song.

LN: You’re not by any means the first person to react in that way – Maybe because that song was so special for me – I can definitely understand how other people relate to it also. Because in effect, I did write it after a huge break-up. You know I had a ‘nuit blanche’, stayed up all night in fact, and then in the morning, I looked out of my window, here in Paris – the sun was shining. I wasn’t anywhere near the ocean, but the combination of sunshine – and happy music playing in the background – and my tears streaming – all the while I was writing – I couldn’t have written that song at any other time. It would have been a different song.

ParisGirl: And you wrote it in English, even though your first language is French?

LN: Yes. The words came to me like that, “I’m staying here…” in English, not in French.

ParisGirl: How did you start writing songs in English?

LN: So many of my friends come from different countries – from Holland, from Belgium, the UK, for example – so when we get together, the conversation just slips naturally into English. I associate English with the pleasure of traveling and I’ve always liked listening to foreign singers.

ParisGirl: But neither of your parents are English?

LN: No, they’re both French, but my Dad’s English is pretty good.

ParisGirl: Which leads me back to my first question regarding French female vocalists, how does their singing style differ from English-speaking vocalists, for instance, when it comes to technique?

LN: It’s inevitable that the singing style is different. You listen to a song in English for example and you have a liberty of expression tht you don’t get in French. Everything has to be poetic in French. In English, you can say any old thing and ‘Ca sonne!’ ‘It has a ring to it!’ The sounds are just plain different. In French, it’s hard to bring out the resonance. English is more open. Technically speaking, you just can’t do the same thing in French that you can do in English.

Just to give you an example. Take the Australian singer Tina Arena. She came out with the song ‘Woman’ and decided to do a French version.

The French version is called ‘Un Autre Univers’ If you listen to those two versions, you’ll see that they’re nowhere near the same. The language changes EVERYTHING!

I asked LN about her plans for future concerts – and – talk about focus, she is 100 per cent involved in recording for the moment. However, it looks like there will be at least one concert on the horizon this April in Sweden: If you’re interested in finding out more about LN and her future concert dates, visit her Myspace site