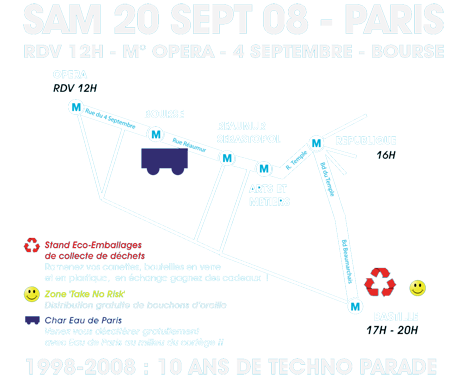 Be kind to the earth, but also be kind to your body. The techoparade website is reminding participants to bring their earplugs and the City of Paris is doing its part by providing 25,000 goblets of water in recyclable plastic.

The Technoparade is just the beginning. Evening events include the 10 pm Beat Box Battles sponsored by Footlocker. Head for the Pont Alexander bridge for plenty of music. Be sure to check out the techoparade website for a listing of all the nightclubs participating in the event and also the Ellen Allien video on the Technoparade’s home page.

Berliner, Ellen Allien is this year’s patron of the ten-year-old Techno Parade – and you can read her comments here.

Even if you can’t be in Paris to participate in this year’s event, FG DJ Radio will bringing the night’s sounds to your doorstep.

The Technoparade is recommending St. Christopher’s Inn in Paris’s 19th arrondissement. This is one of the biggest hostels in the Paris city limits, but Parislogue readers know that hostels can be found in a number of neighborhoods.