It’s September – Parisians are back in town – and so is opera! Well, opera never left, but it’s just moved back indoors – partly. From today (September 5 to September 7, ’08), you can enjoy FREE Paris street opera.

Something’s changing in Paris opera is not only going to the street – it’s going to the stadium as well. Later this month, September 27, ’08, Verde’s Nabucco will be performed at the huge Stade de France (in nearby St. Denis) which is normally reserved for sports events or rock concerts. Perhaps Mitterand’s intentions for a ‘people’s opera’ will be achieved in a way which he never imagined.

For those that are curious about opera, but would rather not spend the entire evening sitting in a concert hall, I would suggest dining at a restaurant where opera singers entertain you while you eat. Bel Canto hires opera singers that often sing at the nearby Opera House. (This is also a nice option if you couldn’t secure tickets for an opera, or if you simply can’t afford to dine out and purchase opera tickets in addition to an evening dinner on the town).

If you’ve never been bitten by the opera bug, know that Paris’s two major opera houses are not only devoted to hardcore opera, but also ballets and orchestral concerts. Of the two opera houses, the 19th-century Garnier Opera House retains the fame of being the haunt of its illustrious phantom. The Bastille Opera House, built in the late 1980s was the brainchild of former president Francois Mitterand who wanted to create an opera house for ‘the people’. If you’re planning on attending an opera or other musical event during your stay in Paris, be sure to book your tickets long in advance. Season tickets are snapped up quickly. Now’s the time to check out the Opera de Paris’s site for their Fall/Winter program and book your places. 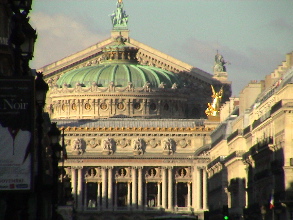 One of the big events of the Fall season is the opening Gala. This year (September 18th), the New York City Ballet will and American Friends of the Paris Opera will join in the Gala. Although the event has already been sold out, you never know when last minute tickets may show up. The best thing to do for last minute tickets is to show up at the opera house about half an hour before opening time (with cash in hand), but do beware of scams and judge the ticket seller with care!

Keep in mind that the ticket office has temporarily relocated to the BACK of the Opera House due to recent restoration work. You will find it at the intersection of Rue Auber.
https://www.operadeparis.fr/Accueil/Actualite.asp?id=668 and Rue Scribe.

Although nothing can compare to the experience of actually attending an event, a tour of the Garnier Opera House is highly recommended. Built in the Napoleon III era style, this building epitomizes the showy luxury of its day. Composers receive their well deserved adulation and Carpeaux’s statuary, La Danse, for example, represent the sheer joy, delight and abandon – which seemed to flit just out of reach for 19th-century opera goers. Muses abounded and their human embodiments – the courtesans of the day always fell just a shy short of such idyllic models. In those days, ballerinas didn’t have the good fortune of state sponsorship and depended on admiring ‘patrons’ to pay their monthly rent. Glorified lap dancers? Happily, France’s determination to uphold patrimoine and culture obliges part of tax dollars to be spent on keeping dancers fed and housed without the added support of ‘patrons’.

Some of the can’t miss features of the Garnier Opera House are it’s Chagal-painted ceiling and the six-ton chandelier. When Chagal’s mural replaced an earlier ceiling painting back in the 1960s, many were dismayed by this new addition as being incongruous with the Napoleon III decor. Chagal’s light airy touch actually matches well with Carpeaux’s sense of whimsey and saves the ornate marble pillars and rich velvet from gluing the ballerinas to the stage. For even though the opera house was created originally for opera – ballet has become a major focus in recent years.

Before you ever set foot in the main auditorium, you know you’ve arrived in a privileged lieu as soon as you set eyes on the marble staircase which leads ticket-bearers to their seats. For one night, everybody who arrives gets a king or a queen’s entrance. Perhaps M. Mitterand objected to this ostentation, but some of us ‘people’ don’t mind being pampered in this way.

Also, don’t miss the intermission reception hall, where patrons used to meet their proteges for a sip of champagne during the ‘entre-acte’. Just like Versailles, Garnier depended on ‘trompe-oeil’ or optical illusions to fool the eye into finding space where space didn’t really exist. However, Garnier uses mirrors to create this illusion – where chandeliers repeat dozens of times in reflection. Walk to the very top of the staircase to gaze down upon a multitude of cherubs amid the rich moldings. Some may judge the interior to verge on garish and self-indulgent. No moreso than a Hollywood extravaganza. Perhaps Garnier was just a precursor of an era of self-indulgence.

PALAIS GARNIER – OPERA NATIONAL DE PARIS
Place de l’Opéra
75009
Metro: Opera
Daily visits: from 10am to 4.30pm (except on days when a special event is scheduled and from 10am to 1pm on days when a matinee performance is scheduled). Full price €8. Reduce price €4. Reduced price applies to under 19s, students, the retired and the unemployed. 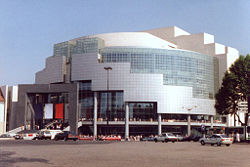 Bastille Opera House
The ‘people’s opera’. Designed by the Uruguayan/Canadian Carlos Ott, this 2,723 seat contemporary opera house is the antithesis of the Garnier Opera House. Where Garnier is ornate, the Bastille opera house is sleek and subdued. It’s reflecting glass facade looks decidedly gray and black. In other words, it reflects what most Parisians wear every day to work. In that sense, it is decidedly the ‘people’s opera’.

Like the Garnier Opera House, daily tours are also available to visit the backstage areas and underground (which comprise the majority of the building). It was built on the 200th anniversary of the storming of the Bastille. Located just across the street from the site of the dismantled Bastille, the Bastille Opera House is the anchor for the surrounding arts community. Although I’ve only attended one concert at this opera house, it’s concert-goers have the benefit from the fact that all of the 2,723 seats have an unimpeded view of the stage. The downside to this venue (according to Wikipedia) is that the acoustics aren’t so hot – compared other top flight opera houses. No names are named, but the question that begs to be answered – are the acoustics better or worse than the original opera house? Parisgirl is no acoustic specialist – so I’ll leave that question to be answered by an expert on the subject.

As to the question whether the Bastille Opera House is more ‘accessible’ to the people than the Garnier, I haven’t noticed that the entrance tickets are any less dear. However, last Bastille Day, a free ballet was offered.

Guided tour :
Call the Bastille Opera to get the timetable of the visits. Tickets on sale 30 mn before the visit.
8 Euros.
Reduced rate for children under 16, students, retired, unemployed.
-26 yrs : 5 Euros.
10 Euros