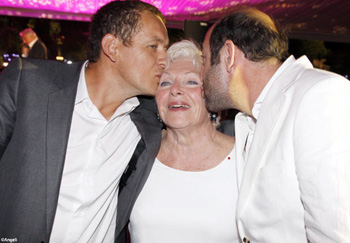 Move over Jane Fonda. While,Jane Fonda has been humbled into doing anti-wrinkle cream advertisements on French TV, you can watch Line Renaud work her magic charm on Guy Bedos in the film ‘Une Famille Pas Comme Les Autres’ or ‘A Family Not like Others’.

I don’t get much time to watch French television, but the first thing Americans notice about European television in general – is that adults act their age.

You can have the choice of watching ‘House’ dubbed in French. (It’s called ‘Dr. House’ here – and it has a good following, or you can watch French movies like ‘Une Famille Pas Comme Les Autres’ with Line Renaud/Guy Bedos (2005) film. It’s a story about a ten-year-old, Michel Ange who chooses Blandine (Line Renaud) as a sort of surrogate ‘Grandma’. Michel Ange’s father has been disinherited by his own parents because of his gay lifestyle (and has subsequently told Michel Ange told that the boy’s grandparents were dead).

The family’s story is a tender exercise in reconciliation, but the sub-plot of Blandine’s budding romance with Antoine (Guy Bedos) underlines a fact of French life: French Grandmas can be sexy – especially when they happen to be Line Renaud. You’ll note that in this role, ‘Blandine’ is not emaciated – and not trying to look anything other than her age. Blandine’s allure derives from her total refusal to accept Antoine’s advances. She considers the idea of a ‘courtship’ to verge on ridiculous, but eventually opens the door to an eventual friendship (although even by the end of the movie, you have no idea how their ‘friendship’ may or may not develop. There are no set formulas when it comes to romance and the ambiguity of French cinema is its greatest attribute.

Blandine is not by any means the only sexy ‘Grandma’ in France. You will find that women in France develop their sense of style and grace as they age – and their love and compassion for those near and dear to them make them simply irresistible. 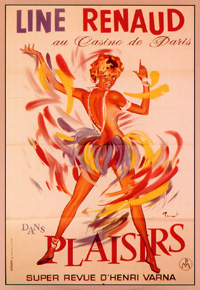