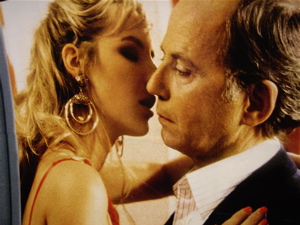 For any of you who’ve spent a little time in France, you may have developed a sentimental attachment to France’s weather reporters, but no real-life weather reporter can stand up to the typhoon that Louise Bougoin stirs up as an ambitious ‘Miss Meteo’ in Anne Fontaine’s recently released film ‘The Girl From Monaco’. 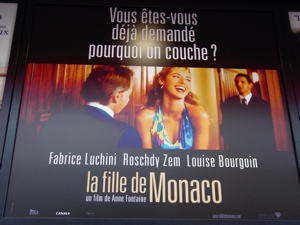 This long-legged bronzed blonde goddess wouldn’t need an extraordinary plot line to keep a film in motion. She exudes enough ‘it’ to mesmerize her co-actors into what one French magazine describes as a ‘jaw-gaping’ Luchini. Nevertheless, Fabrice Luchini snaps out of it long enough to match her charm with the self-searching, and self-conscious attentions of a high-power Parisian lawyer, Bertrand Beauvois, newly arrived in Monaco to try a big case.

Louise Bourgoin may be France’s new ‘Brigitte Bardot’ but I don’t think it’s fair to make comparisons. Two different women – two different eras. In La Fille de Monaco, Bourgoin takes the role of Audrey, an opportunistic gorgeous local girl, who’s perfectly happy to use her body in any means to justify her ends. (That doesn’t seem to need any justification at all). Her icon is Princess Diana (which sets the tone for the potential outcome).

Audrey is admirably well flanked by Fabrice Luchini and Roschdy Zem (who appears as Christophe, Bertrand’s (Fabrice Luchini) bodyguard. In spite of the excellent acting and script – you’ll love some of Bertrand’s rationalizations about seduction and love – all of which crumble into dust when confronted with Audrey, in spite of all this, the film’s plot ends up being a sort of rehashed ‘Flesh and the Devil’ moralistic story. This is hardly the ‘female empowering kind of film you’d like to see from a female director’, but hopefully we haven’t seen the last of Louise Bougoin. Movie script writers, start sharpening your pencils!

Although this is Bougoin’s first film, her television ‘weather reports’ are worthy of being archived: