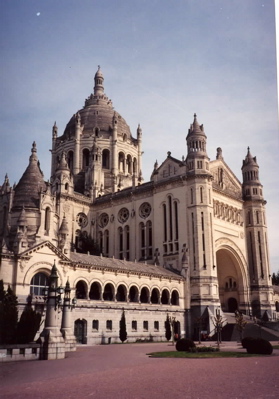 After Lourdes, St. Theresa’s Basilica in Lisieux, Normandy is the second largest French pilgrimage destination for the devout and for those who just like to follow the pilgrimage routes throughout Europe. After Joan of Arc, St. Theresa, otherwise known as the Little Flower, is France’s second patron saint. She lived in the 19th century in Normandy and spent her adult life in a Carmelite convent. She died quite young in her early twenties. Her feast day is October 1st but pilgrimages to Lisieux usually begin on teh 28th of September. The relic which the basilica holds is a part of her forearm.

The basilica is considered one of the largest 20th century basilicas in the world. Its construction was finished in the 1950s. In recent years, its dome has been illuminated with blue lights creating a peaceful beacon overlooking the Lisieux valley.

If you light a candle and make a request, it is thought by the devout that St. Theresa will help make your request come true.