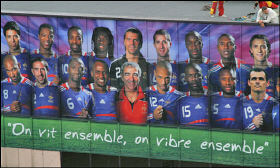 Even if you’re not a sports fan, there’s something fun about events when the national team is playing – it’s something anyone can get behind, whether they really love the sport or not. The good news is that we don’t have to wait for the Olympics for such flag-waving opportunities, either. In fact, starting this coming Monday, June 9, the France Euro 2008 team will begin playing in the Euro 2008 soccer tournament. And even if you’re not a soccer fan, if you’ll be in France while the tournament is going on, you might want to grab a flag and join whatever crowd you can find that’s watching the games in cafes and bars – it’s an excellent way to meet the locals, so long as you’re cheering for their team!

France is, unfortunately for France fans, in what’s called the “group of death” for the first round of play – it’s earned this nickname because it’s a collection of four excellent teams, only two of which can advance to the next round. So, even if the bottom two teams in this group are better than the teams in some other groups, that’s just the way the croissant crumbles, sadly. The bottom line is that even though the French team is good (this is largely the same team that came in 2nd to Italy in the 2006 World Cup, after all), they’ll need all the positive thoughts you can spare to move on to the next round. France last won the Euro tournament in 2000.
The France Euro 2008 schedule for the first few games is here (location of the actual games in parentheses):

Should France make it beyond this group, the games continue throughout June, with the final being played on June 29 in Vienna. You can follow along with the France Euro 2008 team on their team specific blog, and also keep track of what’s going on with the tournament in general on the Euro 2008 blog.