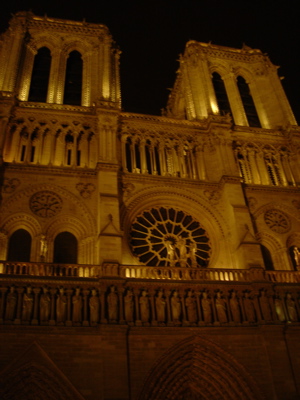 One subject that keeps coming up in conversations about first-time trips to Paris is how the city can be quite intimidating – this can hold true for French visitors as well as foreign visitors – if it’s your first visit to the capital city.

Although Paris is not as multi-lingual as some of its sister capital cities such as Amsterdam, Copenhagen or Brussels, you’ll find that most hotels and hostels have multi-lingual desk clerks. Likewise many of the restaurants in major tourist areas of the city have multi-lingual servers. Even though the majority of Parisians have had English as part of their schooling, they may be reticent to speak English without encouragement.

If you find yourself out on Paris streets and desperate to find somebody who speaks fluent English – stop into a pharmacy. Normally, you’ll find at least one person in a pharmacy who speaks fluent English. Pharmacies are plentiful in Paris and can be immediately recognized by the illuminated green cross insignia. When the green cross is illuminated, this means automatically that the pharmacy is open.

You will probably get lost at least once – whether you have a good Paris map or a Plan de Paris. Visitors who come from cities such as Manhattan which use a grid-like design will be easily frustrated with the circular layout of the city – which is certain to get you wandering around in circles too. On the positive side, no matter how far you get off track, there’s normally a Metro stop not far away. Once you pop back into the Metro system, you usually can renegotiate your way back to where you want to be with the help of Metro maps and station names.

Because Paris is the center of fashion, fine living and culture, the visitor sometimes feels conspicuously out of place. (If you’ve tried walking into some of Paris’s night clubs without a ‘regular’, you know what I’m talking about!) The important thing to remember is not to worry too much about appearances. You’re here to enjoy the sights, and apart from bringing along evening clothes for a splurge dinner in a nice restaurant or cocktails at the hotel bar, you don’t need to try to compete with Parisians.

In the summertime and on weekends, the style is very casual. More often than not, the person sitting next to you in a cafe will be another visitor. Jeans are worn almost everywhere (even at the Paris Opera House).

If you haven’t been to Paris in recent years, you may be surprised to see how the city has changed its attitude. Young Parisians are actually quite interested in American culture and more and more young French professionals are finding work in either England, Ireland or the US – so attitudes have definitely changed towards Anglophone countries. With more and more French family members working overseas, you’ll find an eagerness to communicate and a common ground for conversation. Take the time to strike up a conversation and you may be surprised to see what a warm welcome is waiting for you.

Just remember that an initial brusque attitude is simply a defense mechanism that melts quickly if you take a little time to get beneath the surface.

Some things you can do to get off to a good start:

As you’ve read in past posts, always be sure to say, ‘Bonjour, Madame, Bonjour Monsieur’ when you walk into shop or restaurant.

Establish a good rapport with your front desk clerk at your hotel. (If you want to read what can REALLY go wrong when a desk clerk rapport goes sour, check out Douglas Kennedy’s novel “The Woman in the 5th”).

In restaurants, don’t sit down until the maitre d’ or waiter directs you to a seat (if he gives you a lousy location, never hesitate to ask for a better place).

Be prepared not to be in a rush – for meals or even for shopping in markets. Conversation is part of everything that people do in France – a crucial part. You may think that the customer in front of you is taking way too much time to make his/her purchase – and wasting the shopkeeper’s time. This is just the opposite (in many cases). Conversation mixed with commerce is the spice of life. (More on this topic later!)

Cost
Many visitors to Europe limit their stay in Paris to a few days simply for fear the city is too expensive. Realistically speaking, Paris is not that much more expensive than other European capitals. In fact, compared to Scandinavian capitals with their huge VATs, and even compared to London, Paris can be considered reasonable. If you’ve been following Why Go? Paris (Parislogue) posts for the past few years, you already know that there are plenty of options for inexpensive lodging at hostels or cheap hotels, and plenty of free museums, concerts, and even free food. The key is to do a little bit of research before your trip and you should be able to stay in Paris for a minimum four to six days to make Paris a lasting memory. If you have enough time, spend several days in Paris in addition to a visit to one of France’s many regions. Each region of France has its unique flavor and landscape. Discover more on these regions at Why Go? France.

Still hesitating about visiting Paris?
Why Go Paris? readers know that Parisgirl is never far away to answer your questions. (Just click on the Parisgirl photo). I may not have the answer immediately at my fingertips – but our France team is here for you!