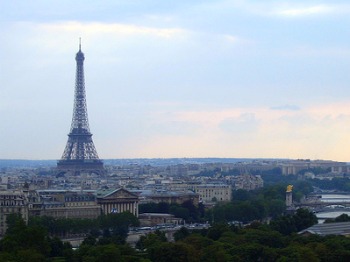 Travel enthusiasts everywhere are asking one another the same question lately – where are you going this summer? It’s a question that tends to lead to fun conversations, but this year it’s leading to more sad faces than usual. Travel this year, as you may already know, is expensive.
Most of us know that traveling to France during the summer is always going to cost more than a trip planned in the off-season, but if you’ve looked up the cost of air tickets to Paris lately you know that prices this summer are higher than they’ve been in a few years. Airfare has gone up primarily because of the high cost of fuel, but it’s also partly becaues it’s the summer high season and airlines know demand is greater, too.
For some trips, it’s easy to adjust your plans in light of airfare costs and say, “I’ll just go at another time, then” – but for others, the summer is the only time that trip will work out. That may be because you’re a cycling fan who’s planning to chase the 2011 Tour de France around the country, or because the summer is the only time your whole family can get the time off that’s required for a long vacation. Whatever it is that might be keeping you from switching your travel plans to a cheaper time of year, your first order of business to make sure you don’t spend a fortune on your trip is finding cheap tickets – or at least as cheap as possible.
Your best bet is to keep your travel dates as flexible as possible from the outset, checking the prices on a range of dates and times to see if there’s a certain day where the cost of a ticket is significantly lower. The cheapest days to travel are usually mid-week – Tuesday and Wednesday – so don’t limit yourself to flying only on weekends. Another tip is to consider package deals – when airfare is at its highest, that’s when a package that includes airfare, hotel, and perhaps some in-country transportation is an even better value.
Unfortunately, since you’re unlikely to find a serious bargain on airfare alone during the summer, you may need to look for other ways to save money during your trip. If you’re traveling with a group, consider doing a road trip in France instead of buying train tickets or a Eurail pass – splitting the cost of a car rental and fuel is a great way to make the overall cost of a trip lower for everyone. And don’t forget the simple pleasures of a picnic – shopping in France’s food markets or at the roadside stands you sometimes find in rural areas is an excellent way to eat like kings for a fraction of what it costs to eat in restaurants.
In the end, if you’re searching only for summer travel deals and less fixated on a trip to Paris or elsewhere in France this year, then chances are good you’ll pick a different time to visit France based on the cost alone. If nothing but France will do, however, then you’d be smart to be diligent about researching your travel options to make sure you don’t get stuck with a sky-high bill for your flight.
photo by Pazit Polak