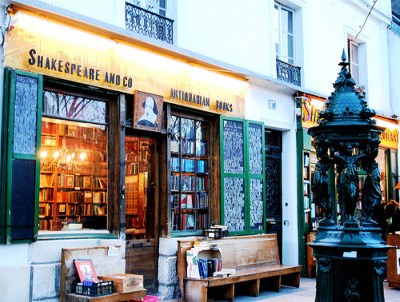 Even though technology is making it so we may never have to pick up an actual book made of paper ever again, that doesn’t mean there won’t still be people (me included) who like the tactile experience of turning pages. And for many, when we’re traveling is one of the few times we’re not burdened with so many other “to-dos” that we can actually read more than a few lines before falling asleep. So it’s not surprising that even travelers who no longer use travel guidebooks still bring something to read on the plane or in their hotel room at night.
But what happens when you finish the book you’re reading in the middle of your Paris vacation? If you’re traveling with friends or staying in a hostel with a “leave one/take one” library, you might get lucky and be able to swap your book for another one. If you’re traveling solo or the books available to you aren’t to your liking, however, you aren’t completely out of luck – Paris is one of those cities that has several English-language bookstores.
A recent article on BootsnAll, “A Guide to English Language Bookstores in Paris,” tackled the topic well. The author helpfully not only provides a list of the main English bookstores in Paris, she also notes what tourist attractions are close-by – thereby dispelling the myth that such things as bookstores are so far off the beaten path that you’ll have to go out of your way to find them.
Six English bookstores in Paris are outlined in detail in the article, including the famous Shakespeare and Co. (once owned by Sylvia Beach), and further down the page you’ll also find a list of six additional places to find English books in Paris. It’s an excellent resource for anyone who needs a new book to read on the plane ride home, and even more so for Anglophones in Paris on a more long-term basis.
One English bookstore not included in the article is Brentano’s – because when the article was published late last year the shop had been closed for nearly six months after declaring bankruptcy. A new owner has come in, however, and there will soon be a new Brentano’s in Paris selling English books at its location on Avenue de l’Opera. Although it’s certainly not the only English bookstore in Paris (as we’ve already noted), it was one of the oldest, having been opened in 1895 – so it’ll be nice to have Brentano’s back.
photo by pedrosimoes7