February – the month for blooming romance in Paris 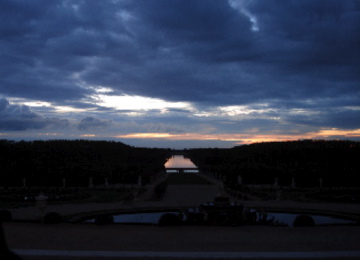 “The Bewitching Hour – Sunset at Versailles”
Where patriotic red, white and blue blurrs romantic: Blue, White, and rose.
Photo by Lori Bertolini ©2007
Was there ever a more romantic time to be in Paris than February? Judging by the recent events of this past weekend – President Nicolas Sarkozy’s Saturday marriage to Carla Bruni and the nip to the air that has most of us wanting to stay under the covers an extra hour – February is most definitely becoming the most romantic month to be in Paris.
If you were one of the fortunate tourists to be wandering through the Versailles gardens this Sunday (Feb 3,’08) you might have had the opportunity to ask President Sarkozy for an autograph as he and his new bride snuggled into cafe seats at the Versailles garden’s Cafe Flottille – opposite the reflecting ponds. The photo of this newly-wed couple splashed across Monday morning’s Le Parisien looks like the typical cafe couple you’re likely to see on a crisp Sunday afternoon in February.
Keep in mind though that the temperature yesterday was 32 d. F or 0 celcius so the flame of your passion had better be ample enough to sit outside long enough to savor that cup of expresso. For those that are interested – President Sarkozy drank coffee and Mme Sarkozy prefers tea.
There are other good reasons to be in Paris right now. If you fly in to CDG on a Sunday morning, the airport is so quiet you’d think there was a strike – but everything runs smoothly. If you’re coming into Terminal 1, customs is a breeze. Only one quick check of your passport – nobody bothering to check again once you’ve gathered your baggage – you’re out in the main lobby, headed to Door 34 to catch your Air France shuttle.
The first site we see as the bus wheels into town – a couple embracing, and then another.
It’s Sunday. The sun is shining. And no one complains. Not even the artists who stand patiently beside their exhibited works at the Marche de la Creation Edgar Quinet. Metro: Edgar Quinet.
One artist has painted Nicolas Sarkozy in three separate tableaux called,
Red, White and Blue. In the white painting, Sarkozy has a halo of light around his head. The blue painting is reminiscent of a figure from Picasso’s blue period – and the red, is it Valentine red or devilish red? That remains for the viewer to imagine according to whatever your political tendencies may be.
My main point in mentioning this particular series of paintings is to underline the fascination (in spite of the low popularity polls) with the Sarkozy presidency, not just in France but throughout the world.
It is refreshing to see the portrayal of a happy couple in love – looking just that – two newly married residents of the 8th arrondissement on a Sunday outing at Versailles.
This is Paris.
If you want to treat your sweetheart to a cup of tea (or a kir royale) at Brasserie La Flottille – described as the “perfect place to lunch with your friends or your soulmate”, walk out from the Chateau de Versailles and toward the gardens. The Brasserie La Flottille can be viewed from the row of steps overlooking the reflecting canals. It will be directly to the right of the canals. (The canals are farther from the chateau than they appear at first glance – so be sure to wear comfortable walking shoes).