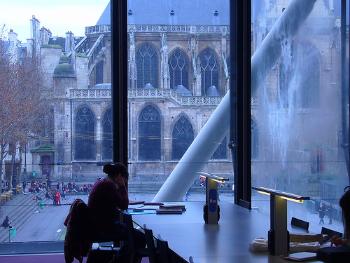 Come in out of the cold! February in Paris may be cold and drizzly, but what better place to cuddle, curled up in the crisp sheets of a Paris hotel, bed and breakfast, or apartment? What better excuse do you need to spend all day sipping cafe au lait in the corner of a cozy Parisian cafe?
Outside, the skies may be gray and gloomy, but during the winter months, the Paris party just moves indoors. February might be voted the darkest and dreariest of months, but it can also be the most romantic of times. You’ll be able to visit the popular tourist sites – such as Notre Dame and Versailles – with far fewer crowds. Or, you can bundle up in your warmest coat and most stylish boots for a walk along the Seine River that (in my opinion) looks even better in the fall and winter months.
Weather in Paris in February
February isn’t all that different from January in Paris, in that it’s usually downright cold. We’re talking about temperature ranges from 35-45F (3-8C) and the occasional sudden downpour. The snow may not be falling with the regularity that it did in December, but it’s likely that the ground is still covered with the remains of the winter white, so water resistant shoes or boots are a good idea. And while it can be hard to justify the packing space necessary for all those sweaters and mittens, you’ll be sorry if you don’t bring clothing that’ll keep you warm. Oh, and a little travel umbrella isn’t a bad thing to carry, either. If all of this talk of the potentially bad Paris weather is putting you off the thought of going to Paris in February, just take a peek at the low prices on airfare or hotels and you’ll be right back on the February bandwagon.
Events in Paris in February
France celebrates Valentine’s Day. Although you’ll see from this Daily Motion Valentine’s Day interview – that not all Parisians may be as enthusiastic about this day reserved for lovers. There are sometimes vacation packages for this romantic holiday in Paris, but be sure to compare the prices to what you’d pay for a flight and hotel individually – sometimes adding the words “Valentine’s Day” and “Paris” to a package makes it seem more enticing when it’s not really the best price. When you get to town, however, be sure to pick up a box of Valentine’s Day chocolates from some of the best chocolate makers in the world. Or simply sip a cup of chocolat chaud at one of Paris’s new chocolate bars.
>> Read more about what to do in Paris for Valentine’s Day.
The ice-skating rinks which were set up before Christmas in Paris often last through February. The two best-known rinks are in front of the Paris City Hall (Hotel de Ville) and at Montparnasse.
Feeling nostalgic? Want to satisfy your inner car nut? You can go to Retromobile, Paris’s annual retro car show at the Porte de Versailles exhibition center.
Although Paris doesn’t have a Mardi Gras to match the Venice or Brazil Mardi Gras, in past years the annual Carnival de Paris kicks off in February with a parade to chase away the winter blues.
The Chinese New Year is a bit of a moving target, but it sometimes falls in February – and whenever it falls, there are celebrations in the 13th arrondissement (where the bulk of the Chinese restaurants are) which are worth checking out.
Maybe you’d just like to make a quick getaway to Paris and indulge in some winter shopping? The sales which began in mid-January generally last until mid-February, so you’ve still got time to take advantage of the twice-yearly discounts on just about anything you can imagine. (Each year, the government designates the specific winter sale dates for each region of France, so check with your hotel to find out when the sales end when you’re visiting.)
As of this writing, one of the spots highlighted on the City of Paris listing of ‘romantic shopping’ choices includes the ‘Marche de la Creation’, the artists’ Sunday market (Metro: Edgar Quinet). However, here’s my suggestion for romantic and inexpensive shopping. You don’t have to go out and buy expensive designer perfume or jewelry. Buy a candle. What could be more romantic – and more easy to pack? And hey, if you get chilly in your hotel room, you can always pop out one of those candles and create a bit of warm ambiance.
Candle Stores in Paris
Artisan Parfumeur
Diptyque
Autour d’une Flamme
After visiting Paris in February, you may decide that this is the idea month of the year to make your future visits.
original photo by LouisL