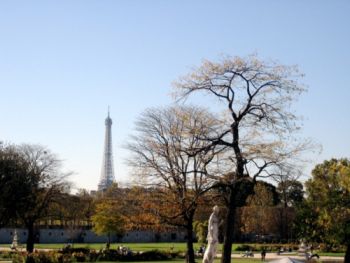 While summer fares to Europe have been astonishingly good this year (in fact, fares to Paris are down on average 20%-33% from last year), if you are looking to get over to France for even less, this fall may be the ideal time to go. Not only will you save money on airfare, but you’ll also be able to rack in some savings at Europe hotels and hostels in Europe, which lower their prices after the peak summer tourist season is over. Plus, September and October in France are my favorite months in the country.

While there’s still time to get cheap summer airfare to France, for those holding off on buying their cheap tickets to Europe in the hopes fares would drop even further, it looks like now is the time to bite the bullet and hit that “book now” button. In fact, I read a NY Times article yesterday that said airfares from New York to Paris this October start under $400 round-trip. With all of the money you’ll be saving on airfare, you’ll certainly be able to indulge in a few extra bottles of wine and as many French pastries as you can eat (and that’s what going to France is all about, right?)

While it was never easy to get cheap airfare to Europe in the past, the suffering economy has made for some really unbelievable deals this year. George Hobica of Airfarewatchdog.com has said of the recent fare sales: “We haven’t seen a sale like this in, oh, well, ever, really. Some fares are in the low two-hundreds roundtrip, including tax, even from the western U.S. Other fares are in the three hundreds and four hundreds. These fares are 50 percent or more off from what they were just a few hours ago.”

In the past, I could never justify a short trip to France (I define short as anything other than a month), but with fares so low, the dollar stronger and so many great deals at hotels around the country, I’m even considering a week-long jaunt across the Atlantic to hang out in the City of Lights.

While fare sales are abound right now and you shouldn’t have a hard time scoring your great deal on cheap airfare to Europe, those who want the very best price should look to travel in mid-August through late fall when the prices are best. If you are planning on traveling around Europe, look for fares in more than just Paris, as there are some equally great deals to be found on flights to cities like London, Frankfurt, Madrid and Rome.