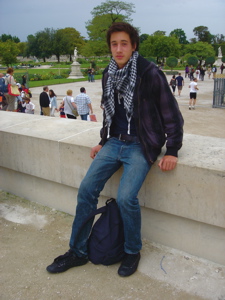 August has barely slipped away, but (thanks to a cold snap during the third week in August), Parisians have already pulled their boots out of storage (some of us were still wearing them in June) and the essential Fall accessory- a long scarf to protect the neck.

This Fall (2008), you’ll undoubtedly spot French students wearing a keffiyeh. The scarf/headdress is most commonly associated with the desert regions of North Africa and the Middle East.

Way back in 2005, the keffiyeh scarf was considered in some fashion circles to be ‘cool’. According to my Canadian fashion trends source, she noted that the kefifyeh-bearer profile differed depending on which side of the pond you inhabited. “In Canada, it was more often the skinheads that wore keffiyeh but the keffiyeh was also very much part of the gay chic. Here, in France, it looks more like a preppy thing.”

Keffiyeh goes the way of the pashmina

So, don’t be surprised to see French students sporting a keffiyeh to protect them from catching a ‘rhume’ or a cold during the Fall and Winter months – which is quite different from its original intent – to protect desert dwellers from sandstorms and sunburn. In desert regions (including the Middle East and north Africa) the keffiyeh is used to protect the top of the head as well as part of the face and neck. Historically, one’s tribe and tribal status could be ascertained by the headdress details.

Which brings us to the very heated debate about whether wearing a keffiyeh may also be a political statement. It’s been suggested by some politically correct fashion police that wearing this black & white (or red & white) checked scarf shows the wearer to be a sympathizer with the Palestinian liberation movement. Take that one step further: wearing such a scarf symbolizes anti-Semitism. Part of the reason for this assumption was the fact that leader of the movement for a Palestinian state Yasser Arafat was often portrayed wearing the keffiyeh.

If you ask the average French student whether his or her choice of scarf reflects their political values, you will probably be met with total incomprehension. The keffiyeh is such a mainstream accoutrement for students that it would be verging on ridiculous to suggest that most students were concerned about little else than passing their ‘bac’.

Meanwhile, back on the other side of the pond, Dunkin Donuts learned very quickly the price to pay for ignoring the politics of fashion. After much clamor, Dunkin Donuts finally pulled a commercial featuring Rachel Ray wearing a scarf (that resembled a keffiyeh) but was described by the fashion consultant for the shoot as a ‘paisley scarf’. The latest word from ‘Down Under’ is that wearing the keffiyeh was equally offensive to certain Palestinians customers at a Bondi bottleshop.

Aside from being tagged as a ‘gay, skinhead, anti-Semite, Palestine liberation sympathizer’ or whatever label may remotely be associated with this controversial piece of cloth, what might be some reasons you would opt NOT to wear a keffiyeh? The weather is so pleasant, you don’t need to wear any scarf.

Have you been criticized or forbidden to wear the clothes you like to wear? Parisgirl would like to know. Parisgirl hopes by posting this story, readers will be able to make educated fashion choices.

(If comments get returned as spam, feel free to e-mail by clicking on the photo).

>>More on the keffiyeh at Runway2Reality