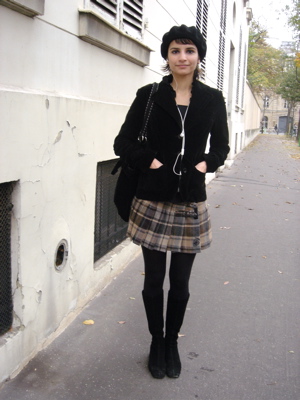 What you see on a fashion runway and what you’re likely to see on the streets of Paris may be quite different. One thing is certain, Fall is the season to come to Paris if you want to enjoy looking at French street fashion.
This is the season when women dress their best. A case in point would be this past holiday weekend, All Saints Day, when we met Leila on a street in the 7eme, not far from Les Invalides (Napoleon’s Tomb).

This season, skirts are super short, and most often worn with opaque stockings. If you’re not okay with short skirts, slightly flared knee length is also fine. The color palate is still undauntingly based on black, yet gray is definitely OK, especially since Cecilia Sarkozy was featured in this past month’s Elle Magazine wearing a demure gray dress. 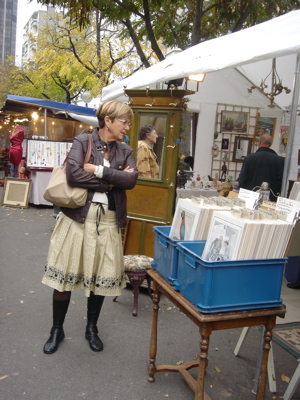 You’ll also see knitted pullovers with huge polka dot or geometric embellishments. And leather, as always, never goes out of style. This season, I’ve noted that leather coats are showing up in shades of beige and brown in addition to the timeless black ‘blouson’.

Even though some fashion magazines are still featuring animal prints, it’s due to time to put this look to rest. What may have been ‘branche’ back in the late nineties really deserves to be finally put away in a time capsule for the next millennium. (After saying this, I’ll probably take out my 1960s vintage faux leopard coat for one last sortie)

Boots continue to be a fashion necessity. You’ll also note that most of the Left Bankers have the good sense to choose boots with reasonably flat heels – we tend to cover a lot of ground in this city – and it’s usually by Metro. If the RATP does decide to strike next week (November 14, 2007), we may be doing even more walking – so put on your low heel boots for this city.

Judging by the recent Animal Rights’ Activists’ protest in front of Escada’s Right Bank store, you may want to leave your fur coat at home (if you have one). I’ve noted that one rarely sees young women wearing fur coats in this city. So regardless of your ‘politics’, wearing a fur coat may add ten years to your look.

OKAY, maybe the activists will get the message here – the quickest way to discourage women from wearing fur coats is for the ‘fashion gurus’ to declare fur is seriously out of date and permanently close the shopping season on fur.

BTW, I am most definitely not a fashion expert – all I can tell you is what I see in Paris streets at this particular time. Another Paris resident might see things differently, especially depending upon where you live and at what time you go out – and most definitely where you go. . . there are styles to suit all occasions and all neighborhoods.

Pack your cachmere sweater and a nice pair of leather boots and you’ll be ready to hit the streets, but most important – enjoy the passing scenery. Paris is first and foremost about people-watching.