Exploring the Montmartre Neighborhood in Paris 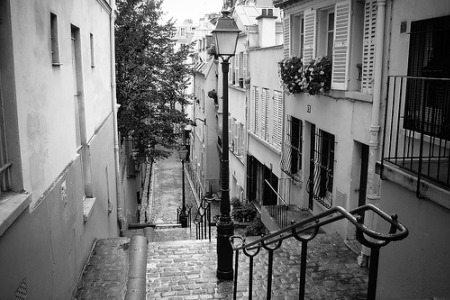 When I first visited Paris, the neighborhood that made me fall instantly in love with the city was Montmartre. I’m not alone in my love for this hilltop maze of streets, nor am I particularly unique for having taken to it while I was young and impressionable. It seems the area is a magnet for the young, the artsy, the idealistic – the Bohemian in us all. And luckily for those of us who weren’t around during the heyday of “Paris in the 20s,” Montmartre has maintained much of its Bohemian charm – even if it’s much more touristy now.

While Montmartre is what we call this hilltop neighborhood, the neighborhood took its name from the hill itself (“mont” being the French word for “mountain”). It’s the highest point in Paris, and its crown is instantly recognizable because of the gleaming white Sacre Coeur Basilica at the top. Largely due to its history as one of the parts of Paris where artists gathered, Montmartre still has many art studios and galleries tucked into tiny storefronts. It’s also home to a number of the hostels in Paris, as well as plenty of budget hotels, and some of the best cheap eats in Paris are served up there, too. In short, if you’re a budget traveler it’s definitely an area you’ll want to spend a little time in.

Montmartre is Paris’ 18th arrondissement, which lies pretty much due north from Notre Dame.

What to Do & See in Montmartre

One could argue that the main sight in Montmartre is the neighborhood itself, but there are a few attractions worth mentioning as well: 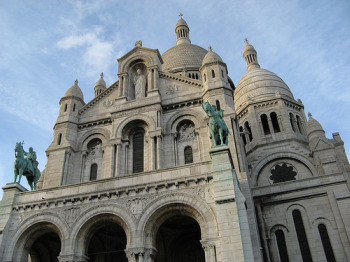 Where to Stay in Montmartre 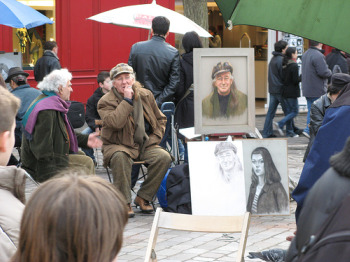 As mentioned, Montmartre is still something of a haven for budget travelers. There are quite a few hostels in Montmartre (although most are at the base of the hill rather than up at the top), and there are budget hotels all over the 18th as well. Here’s our article about Paris hostels in Montmartre, including a map of the area so you can place each one.

For those of you with a bit more money to spend, there are also several hotels in Montmartre that are a bit of a splurge – the area has, after all, become much trendier than it once was. Also keep in mind that there are guest houses and B&Bs in Montmartre, too, which may show up under the listings for Paris hostels rather than Paris hotels – it’s because they’re considered budget options, not because you’ll be sharing a room.

Where to Eat in Montmartre 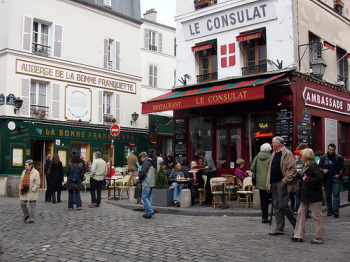 Montmartre is where I had my first crepe in Paris, so I’ve always had a romantic notion that it’s where to go to get the best crepes. The good news is that my affection for Montmartre crepes wasn’t just youthful folly – it’s definitely one of the places to go in Paris to get good (and cheap) crepes.

But Montmartre is more than just crepes. There are enough decent take-away food options in the neighborhood that you can enjoy a cheap lunch (or light dinner) without limiting yourself to those famous Parisian pancakes. Unfortunately, as the top of the hill has gotten quite touristy in the last few decades, you’ll probably need to head a bit down the hill in order to find a truly Parisian bistro or restaurant (serving more locals than tourists) without tourist-high prices. Remember, when your table comes with a sought-after view, you’re paying for more than just the food.

Read more about finding cheap eats in Paris and, more generally, about where to eat in Paris to help you in your quest for the perfect Parisian meal.

How to Get to Montmartre 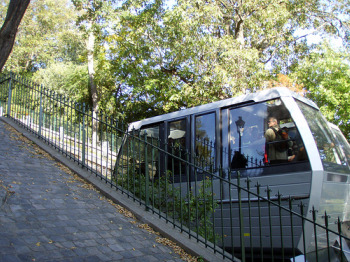 Because Montmartre sits on top of a hill, the otherwise-nearly-flawless Paris Metro can only get you so far. If you’re in the mood for a hike, you can climb the often-photographed stairs from one of the Metro stops, and if you’d like to give your feet (and lungs) a rest you can take the funicular up and then take the stairs back down.

It’s worth noting, however, that even though the well-known Abesses station (one of the most beautiful Metro stations in Paris) spits you out onto the street at a point that’s not at the bottom of the hill, the trains themselves are still the same distance underground as all the others – so even if you’re opting for the funicular, you’ll still be climbing quite a few stairs to get from the Metro platform out into the world again. (Yes, there’s also an elevator – but if you take the elevator you’re missing out on the brightly-painted walls of the stairwell.)

Montmartre Metro Stations: Abesses, Place de Clichy, Blanche, Pigalle, Anvers, Barbes-Rochechouart, Chateau Rouge, Lamarck-Caulaincourt, Jules Joffrin
Montmartre Funicular: The funicular (hillside tram) will carry you from the base of the hill (at Place St-Pierre) to the top, near the Sacre-Coeur. Because it’s run by the same company which runs the Metro (RATP), a ride on the funicular uses the same tickets as the Metro.
Montmartre Bus Lines: There’s a “Montmartobus” which runs throughout the Montmartre district all year long, starting at Place Pigalle and stopping at all the major points of interest in Montmartre (here’s a map of the route, in PDF form). You can hop on and off as you like, and as it’s also run by the RATP it also uses the same ticket as the Metro. Otherwise, regular bus lines 30, 31, 80, and 85 run through Montmartre.

The combinations most often recommended of the above-mentioned transport options are: