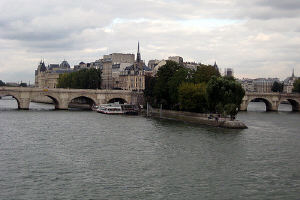 The Île de la Cité is not only where one of Paris’ most famous tourist attractions lies, it’s also the historical center of the city. It is, in fact, where the city began. So if you like Paris, you have the Île de la Cité to thank for it.

The larger of the two natural islands on the Seine, the Île de la Cité is where the city’s first people settled, and there have been people on this island for more than 2,000 years – there were people living on the island when Caesar showed up from Rome in 53 BC. The island went from being simply the place where people lived, to the center of the city’s new government, to the city’s legal and religious center. Today, the Île de la Cité is once again largely residential, although it still has two major churches and an old royal palace which now serves as the Palais de Justice.

Easily the top tourist attraction on the Île de la Cité is the Notre Dame cathedral. The cathedral was started in the early 12th century and built over a period of 170 years, and it’s one of the city’s must-see sights. But although the cathedral is a relatively recent construction on the Île de la Cité, the ruins of some of the island’s first buildings lie beneath it. You can visit some of what’s been excavated in the Crypte Archéologique – the entrance is right on the main square in front of Notre Dame.

Also on the square facing Notre Dame’s Gothic towers (the square is known as the parvis), you’ll find a star-shaped marking on the ground which is called Point Zéro. This is considered the very center of Paris, and is the point from which all distances are measured in the entire country of France.

Within the walls of the Palais de Justice, you’ll find the second major church on the Île de la Cité – Sainte-Chapelle. Although this church occupies very little ground (it has quite a small footprint), it soars majestically above the palace walls and has been called an architectural masterpiece of the Western world. There are two chapels, but the Upper Chapel is the highlight – it’s graceful and beautifully lit by a series of incredible stained glass windows.

For a peek into Paris’ gruesome past, check out the Concergerie, where prisoners were held before being sent to the guillotine. Among the many people who passed through the doors were Marie-Antoinette, Madame du Berry, and Charlotte Corday, who killed Jean-Paul Marat.

And if you need a lighter break after that, stop into the Marché aux Fleurs et Oiseaux – it is, as the name says, a flower and bird market! It’s the last traditional flower market in Paris, and on Sundays the flowers are replaced by a market for all kinds of caged birds.

Getting There
Island or not, there are both Paris Metro & RER stations on the Île de la Cité, and it is also served by several bus routes.

Staying There
There are no budget hotels on the Île de la Cité, and the hostels in Paris are located elsewhere, too, but there are high-end hotels here. If you can afford it, it’s a lovely place to stay – right in the center of Paris!