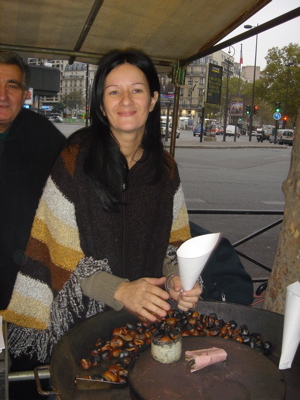 One of the simple pleasures of Christmas in Paris is the prevalence of chestnuts in holiday recipes and Christmas treats.
Whether you prefer your chestnuts simply roasted over the open fire a la Mel Torme, or whether you prefer them included in a more sophisticated form, this is the time of year to really savor the chestnut flavor in a variety of inventive recipes.

In France, chestnuts are often included in the turkey stuffing (chestnuts plus ground sausage) Chestnut soup makes a hearty starter. At any time of year in France you can enjoy a chestnut cream-filled crepe. You can pick up a jar of sweet chestnut spread in most supermarkets right next to the jams, jellies and Nutella.

Marrons glaces or sugared chestnuts are a popular holiday treat.

People are not the only creatures that love chestnuts. So do wild boars, so if you take a walk through the forests of Fontainebleau and stumble upon a pile of fallen chestnuts, a wild boar may have gotten there before you.

Some people think that chestnuts may have been one of the earliest foods in Europe. During the Middle Ages, chestnuts were eaten by Europe’s poor.

Still in Paris, you can buy roasted chestnuts on Paris street corners (Montparnasse, for example).

Chestnuts find their way on to the tables of both rich and poor during the holiday season. For example, check out this enticing looking dessert on Chantal’s food site
The English translation turned out to be pretty amusing. It says to prepare for fools. Believe me, this is a recipe for anything BUT fools. Simply scrumptious looking.

If you are very lucky, someone will have chestnuts sitting on the holiday table for you in one form or another.

Here are some more sites about chestnuts: