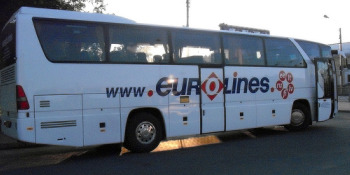 Many people who plan a trip to Paris also intend to visit other cities in France during their trip – and a good percentage of those people then go beyond the French border to visit other countries in Europe while on the continent. Getting around in Europe has long been dominated by the extensive rail network that stretches from country to country, but the trains aren’t the only way to get from place to place. As long as you’re in a major city – like Paris – you have lots of choices.
One of the cheapest ways to travel from Paris to other countries in Europe is on a Eurolines bus. Eurolines is a collection of more than 30 bus/coach companies in different countries throughout Europe. Under the Eurolines umbrella, they make ticketing and travel from country to country incredibly simple – without the Eurolines connection you’d have infinitely more difficulty booking a bus trip across Europe.
Paris is one of the more popular stops for Eurolines, almost regardless of where you’re starting from, so here’s some information about the Eurolines stations in the Paris area and how you can book a Eurolines ticket to get from Paris to another European capital.
>> Keep in mind that travel on Eurolines from one city to another in the same country, including France, is generally challenging if not impossible. Eurolines trips are meant to be more long-haul, connecting countries. For travel within France, your best options are the trains or budget airlines.

Because Eurolines is a network of 30+ different European coach companies, the websites vary depending on which country you’re looking at. Some of them have an English option, and many don’t. So even if you’re planning a trip from Paris to another country with Eurolines – and therefore would instinctively click on the links for people starting a journey in France – be aware that some of the site will be in French.
Have your phrasebook handy.
Start on this Eurolines site for bus travel from Paris, then click on the “Paris” link in the center column. From there, you should see a link on the right-hand column that says “Travelling from France?” Click on that and you’ll be on the Eurolines site for travel originating in France. There’s a little UK flag in the upper right corner if Eurolines didn’t remember that you started on an English site, but the section of the site on the left where you’ll book your ticket will be in French – even after you click the little UK flag.
photo by szerenka