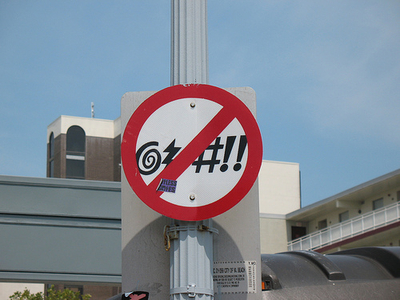 Do swear words sound better in French? That’s probably a matter of personal preference, but the fact remains that just about everyone studying the French language makes an effort to find out what the French swear words are for their favorite expletives in their own language.

With that in mind, we hereby bring you this list of essential French swear words.

Now, just as swearing in your own language is something you need to be careful about (knowing when it’s okay to let loose with a curse word and when it’s not), the same is true in Paris. It’s fun to try these words out with your fellow students in French class, and you’ll want to have a camera out to catch the look on your French aunt’s face when you remind her of the various naughty words she used to say when she thought you weren’t listening. But it’s probably not a great idea to go spouting any of these French curse words on the streets of Paris. As Julie notes on WhyGo France:

…language plays an immensely important role in French culture. In fact, being articulate and well spoken is considered to be an extremely valuable asset and characteristic, and while the French also like to curse a lot, the term most often associated with curse words is “unrefined.”

Having said that, Julie also notes that among your French friends, using one of these gems in the right context can be the source of much amusement – for both you and your friends.

>> You can read more about Julie’s favorite French swear words, too.

If you see a blue arrow next to a word, click on it to hear the pronunciation!

merde (MEHR|duh) = shit
It’s perfectly acceptable to say “Merde!” for ‘Good luck’ when your friends are going to take an exam. In fact, it’s preferable to saying “Bonne chance!” which is really considered an unlucky thing to say. Other ways to say “shit” include “C’est chiant,” which shouldn’t be confused with Chianti – it means something is just plain shitty, and “C’est genant,” which is slightly less vulgar (it means “That’s bothersome”).

putain (pooh|TAHN) = damn
Putain literally means prostitute. Yet, when it’s used as an expletive, it translates into English as ‘damn,’ but it’s considered to be stronger language than ‘damn.’

foutre (FOO|truh) = to fuck
The most common way you’ll hear this verb is in the phrase, “Je m’en fou,” which is the equivalent of “I don’t give a fuck.” It’s so widely used that it’s often translated as, “I don’t give a damn,” but it’s definitely more vulgar than that. Another phrase you’ll hear with this verb is,”Fou-le-camp,” or “get the fuck out.” If you want to say the same thing with less sting you can say “Va-t-en” instead – it’s “go away.” You can also use foutre in the phrase, “C’est foutu,” or “it’s fucked up.”

conasse (KOHN|ass|uh) = ass
While conasse more literally means “cunt,” it’s used in places where we’d use “ass” in English. It’s also commonly shortened to simply “con,” which can be loosely translated as stupid, imbecile, or sorry bastard. There are dozens of ways to use this word, including “Ne me prenez pas pour un con” (Don’t take me for a fool), “Ne fait pas le con” (Don’t be an ass), and “Casse-toi, pauvre con” (Shove off, sorry bastard).

salope (SAHL|up) = bitch
This one is used pretty much the same way we use it in English – you may call someone a bitch with this word, or even use it in the phrase “fils de salope,” or son of a bitch. As you’d probably expect, “salope” is only feminine – but never fear, there’s a masculine version of this word, too. It’s “salop,” and the P is silent.

C’est le bordel. = This is a mess.
The literal translation here is “this is a brothel,” but colloquially it’s taken on the meaning of something being a big mess. It may not be vulgar, but it’s really not for polite company – especially if you combine it with “foutre” and say something is a “foutu bordel,” or a “fucking mess.” If you want to say something’s a mess without curling anyone’s hair, go with “C’est le bazar.”

J’en ai ras-le-bol. = I’m fed up.
This isn’t really a swear word, since it’s not considered vulgar, but it’s fun for its literal meaning. The idea you’re conveying with this phrase is “I’ve had it up to here,” but the literal translation is the much more colorful “up to the rim of the toilet bowl.” The slightly more polite way to say this, if you’re not sure whether grandmere has delicate sensitivities, is “J’en ai assez,” or “I’ve had enough.”

Peter des plombs. = To blow a gasket.
While the verb “peter” literally means “to fart” (and it can absolutely be used to describe passing gas), this phrase stands in for English phrases like “losing it,” “having a hissy fit,” or “blowing a fuse.” What it literally means, however, is “farting lead.” Which sounds awfully uncomfortable, frankly. I can see why someone would be having a fit about that.

When Swearing in Paris is Okay & When it Isn’t

As mentioned, swearing in Paris is something you’ll want to approach with caution – especially if you don’t speak the language well or know the people you’re socializing with. But everyone makes mistakes, and even television announcers and politicians get caught saying naughty words they shouldn’t be saying.

French President Sarkozy tells a citizen who won’t shake his hand to fuck off:

French TV announcer calls a colleague a whore during an accidentally-televised station break:

What’s more, French parents are much more apt to let it slide when they hear their kids swear than most parents do in the United States. In fact, one parent told me that he allowed his kids about ten minutes to use all the swear words they could think of at the end of the dinner hour.

Maybe this sounds weird, but here in France, it’s not a question of whether or not you should use swear words as much as it’s the question of using swear words in the right context and in the right situation. When you figure that a vast portion of the French vocabulary was wiped out by the Pleaides (or the French Academy of Letters) when French literature entered its classic era, this simple act of allowing the language to be exercised and spoken from the most vulgar levels to the most sublime might be considered the key to keeping a language rich and varied.

So, how do you, as an outsider, know when it’s okay to swear in French and when it’s not?

As you’ve probably guessed, your best bet is to avoid using these colorful words until you know you’re around people who won’t be offended by them.

Take, for instance, the totally acceptable, “Faite le compte.” This phrase means “to add up the numbers,” like on a restaurant bill. The word “compte” can sound awfully similar to “con,” which we saw above means “ass” or “cunt” – and the difference in meaning comes down to whether you say the “t” sound or not.

A French friend was very surprised when he cut his finger and I asked him if he wanted a ‘Band-Aid’ – he didn’t hear the ‘d’ and thought I had said ‘bander’ which means to have a hard-on. (The French word for Band-Aid is ‘pansement.’)

Then, of course, there are the fun words in French that sound bad to English-speaking ears but are, in fact, completely normal words. A “phoque,” for example, is simply a seal – although the word is pronounced like “fuck.” And many people still get a good giggle out of ordering the fizzy lemon drink called Pschitt.

photo at the top by Alice Chaos