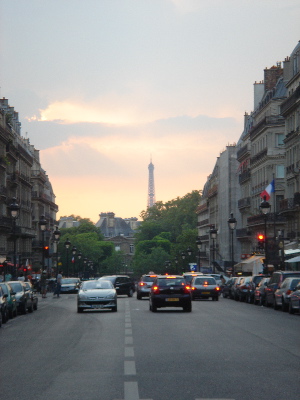 Ever thought about owning a piece of the Eiffel Tower? Last November somebody’s wish came true at the Paris auction house, Drouot when one of 24 sections of stairs originally connecting the 3rd and 4th floor levels of the Eiffel Tower was placed on the auction block.

On the occasions when maintenance requires the replacement of any Eiffel Tower parts, the old parts are immediately destroyed.
The purpose of destroying these parts is to avoid what the company describes as a ‘parallel market’.

The bottom line is, do you want to settle for a piece of the REAL Eiffel Tower, or build your own? In Las Vegas and Almaty, Kazakhstan, they decided to build there own. 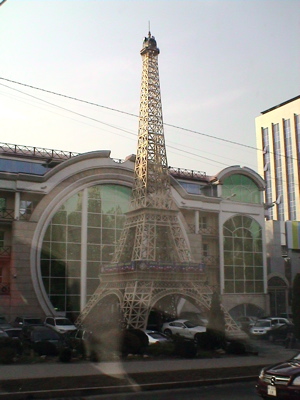 Actually, I’d be happy to settle for one of the zillion Eiffel Tower replicas you can buy at souvenir stands throughout Paris. The typical price for a gold metal replica is approximately $13 (depending on the size).

By the way, the result of the auction for this mini-stairway to heaven from the Eiffel Tower (this was the section Gustave Eiffel climbed to place a flag on the top of the Tower during its inauguration) was auctioned off at 180,000 Euros – even though the original estimate for its auction price was between 10,000 and 20,000 Euros. The newer owner of the Eiffel Tower also happens to be the owner of a Dutch basketball team called the Eiffel Towers.

You can also check out the Eiffel auctioned staircase on MSN video.

Did you know?
The Eiffel Tower took two years, two months and five days to construct starting in 1887 and finishing in 1889?
The tower was composed of 18, 038 individual parts which were produced by 100 ironworkers.
The weight of the tower’s metal framework is 7,300 tons. The weight of the entire structure is 10,000 tons. You can find more Eiffel Tower trivia at the official Eiffel Tower Website.