Dreams of Christmas in Paris 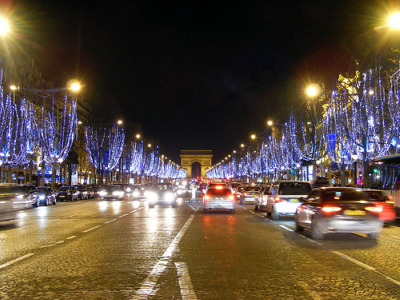 Just the other day I saw a news story on TV about the Christmas lights coming on in Paris – and it was truly a sight to see. The thousands and thousands of lights up and down the Champs Elysees were gorgeous, and the TV announcer noted that this year the lights are LED bulbs and so they’re pretty and not using as much energy as they have in the past. That’s a holiday win-win, if you ask me.

If you’re like me, you’ve got family obligations at the holidays, so my dreams of a trip to Paris over Christmas aren’t likely to be anything more than dreams. But if you’re lucky enough to have an opportunity to travel over the holidays, then you’d be silly not to consider a trip to Paris.

Although airfare will go up slightly just before Christmas, winter is when you’ll find much better deals on airline tickets to Paris – and if your travel plans are flexible you can skirt the most expensive travel days. Accommodation is likely to be a bit more expensive over the holiday itself, but still cheaper than it is during the summer high season – and many of the hostels in Paris are nice enough that even people who aren’t really hostel fanatics can find one they’ll like. Besides, since most hostels now offer private rooms, too, you can choose that option and still pay less than you would at a hotel.

There’s plenty to do in Paris at Christmas, including some things that won’t cost much. And if you’ve got more time to spare, Paris at New Year’s can be even more spectacular, with fireworks at the Eiffel Tower.

It’s not just Paris that has the cool holiday celebrations, either. If you’re making more of your trip and spending time in other French cities, then have a look at some of these traditions for Christmas in France and New Year’s in France on our France travel guide – finding a quieter French village in which to celebrate Christmas or ring in the New Year might be more your style.

And if you’re lucky enough to be making something of a holiday tour of Europe, then even though you’ll need to pick one place to spend each holiday you can enjoy the festivities leading up to each one in several places to see how they do things differently. Travel to Italy, for instance, to see the Pope lead midnight mass in front of the Vatican (and learn all you need to know with our Rome travel guide, too!). Help people in the Netherlands welcome Sinterklaas all the way from Spain. Browse the always-charming Christmas markets in Germany – and check out the other German Christmas markets in Europe that aren’t in Germany, too.

Or, if you’re like me, you’ll take a little mental holiday vacation to walk down the beautifully-lit Champs Elysees and hope someday you get to see it in person.