At last count, about 150,000 canines call themselves Parisians – what lucky dogs to live in this city that seems to hold a special place in its heart for its canine tourists as well as those privileged residents. If you plan on treating your dog to a trip to Paris, you couldn’t have picked a better city. And you can count on a warm welcome.

When it comes to parks, some of the most poshest of parks not only allow dogs but, according to one resident dog-owner – have park guardians – who definitely understand the importance of being able to find a safe haven for these mini VIPs. Take for example, the Tuileries Gardens which allows dogs on the two elevated flanks or ‘allees’ overlooking the gardens. The northern flank faces the the Rue de Rivoli but the southern flank overlooks the Seine River. This is an especially well-protected allee where your and your furry companion can enjoy a jog or a saunter.

Likewise, dogs are welcome in other aristocratic venues such as the nearby Palais Royal Gardens Parc Monceau in the 8th arrondissement and Ranelagh Gardens in the 16th arrondissement (adjacent to the Bois de Boulogne). However, keep in mind that there are designated strolling areas in most of these parks, so be sure to look for sign indicators. Normally you’ll want to stick to the gravel walkways around the periphery and avoid altogether children’s play areas and trimmed lawns (pelouse).

On the Left Bank, both the Luxembourg Gardens and Parc Montsouris allow dogs. You’ll find the Luxembourg gardens’ dog path takes a shared path with the joggers on the periphery leading toward Blvd. Saint Michel (there’s even a little dog fountain on this path).

If you find yourself in Paris’s eastern sectors, Parc des Buttes au Chaumont (in the northeastern sector) 19th arrond., Parc Bercy (in the 12th), the Promenade Plantee, and finally, the expansive Bois de Vincennes (Vincennes woods) are all good choices for sunny fall afternoon. 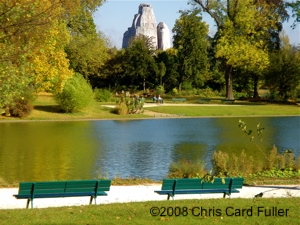 Although all city parks ask dog owners to keep their darlings leashed, you’ll find that the rules tend to be slightly loosened when it comes to larger park grounds like the Bois de Vincennes, especially around the lakes where we saw a number of well-trained dogs allowed to go for a leash-less sprint. This is not only an ideal park for four-legged sprinters, but also for the two-legged variety of jogger (of which we also saw many). 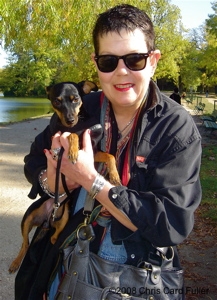 During our visit to the Bois de Vincennes lakes, we met Madison, an extremely coquette MinPyn and her equally chic American mistress, Stephanie. Madison admits that even that even though she’s been in Paris for years, she can’t resist a pause at the McDonalds just adjacent to the Bois de Vincenne’s Porte d’Oree Metro stop (BTW, the Porte d’Oree Metro stop is temporarily under construction till Dec ’08, so take the Michel Bizet Metro exit from the Metro (Aveue Daumesnil). 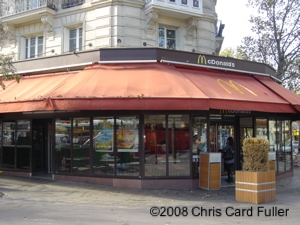 Being such an elegant dog, Madison would be equally welcome in any of Paris’s chic and trendy cafes. You’ll find that bringing your dog to Paris will magically open doors to realms rarely seen by us less fortunate visitors who arrive in the city without our best friend. For those of you who bring along a pint-sized partner, these weight-conscious preeners can get just about anywhere in Paris (except food stores and churches).

During a visit to the Versailles gardens, we brought our dog-sitting charge in a ‘panier/basket’ and the guardians gave her a royal welcome. Dogs that slip into a panier can also ride in the Metro and buses. ‘Seeing eye’ dogs are allowed in public places throughout the city.

Here’s a list of all the parks in Paris that allow dogs. It also includes the designated areas of each park where the dogs may be walked. As you would expect, you MUST kerb and clean up after your dog (the fine for not doing so can amount to 450 Euros). 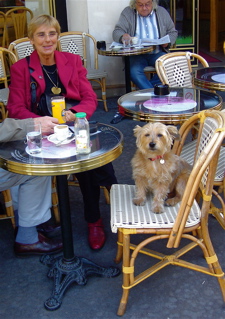 City of Paris’s listing of Dog-Friendly parks (Click on the highlighted ‘Consultez le document’ which will bring up a downloadable PDF file listing the parks as well as the specific areas of the parks where dogs are allowed.

Parc Monceau
Metro: Monceau
Adjacent to the Musee Cernuschi (which is free for permanent exhibits!)