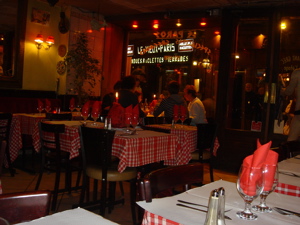 Photo by Chris Card Fuller ©2008
In the Latin Quarter . . .
You had every good intention of picking out a typically French bistro. You had carefully studied your guide book listing of the most authentic and the most reasonably priced, but when the reality of hunger and fatigue confront intentions, you’re just looking for an ‘Open’ sign. Of course, you remember now the word for ‘Open’ in French from my previous post.
Paros Restaurant
28, rue St Severin
75005
01 43 29 20 00
Metro St. Michel
9 Euros 15 Euros. Drinks not included.
Menu includes a choice of appetizer, main course and dessert.
Believe me, there aren’t too many French restaurants in town where you can have a fresh salad for starters, a main course of either moussaka, lamb or pork, an apple tarte or ice cream for dessert for under 10 Euros.
But we’re in the Latin quarter which is noted for some of the cheapest meals in town. The problem is that, not only are the meals cheap, but the quality level can be a little risky. So, in this neighborhood, you had better use your sixth sense, your nose, and your first impressions to make the right choice of the dozens of restaurants that vye with one another for your patronage. The good thing about this neighborhood is that you can drop in well before the normal eating hours because, the primarily Greek and North African restaurants are used to catering to tourists who get hungry at all hours.
What can you expect of a meal in the Latin Quarter? It should be inexpensive. Be sure to take advantage of the menu offerings. Do not expect to be able to make substitutes. Stick to the fixed menu and be careful of the extra cost for drinks i.e. wine and coffees. You can always ask for a carafe d’eau as opposed to a bottle of mineral water. 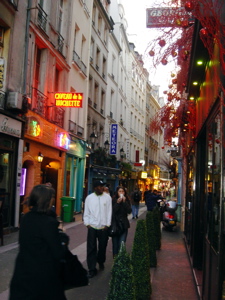 We chose the restaurant Paros at 28, rue St. Severin for two reasons.
1. There’s no outdoor ‘tout’.
2. At 6 pm, two tables had families eating dinner.
Our waiter spoke English and hopes to go to spend some time in England to improve his English. He was very polite and helpful. He gave my spouse an extra scoop of ice cream.
(it must be his winning smile). The house cat jumped in my lap (it must be my fur coat).
Food quality? For 9 Euros, not bad. The Greek salad was extremely fresh (the bread -much less fresh). Main course portions of moussaka are just right for jet-lagged appetites (i.e. not heaping but sufficient). Service was outstanding – attentive and not rushed. I was especially impressed by our waiter’s laid back attitude when a party of six Italians dropped in, sat at a table, asked about the availability of mussels (which he offered to bring over from his restaurant across the street), used the bathrooms, and left without ordering so much as a cafe. He just smiled and said, “It doesn’t matter, we’ll be completely booked later tonight” “I’ve traveled to Italy and I’ve always been treated very well,” he added. Talk about zen attitude. So very cool.
P.S. Do NOT try to go into a French restaurant and pull this stunt. The reception will be icy.
Another plus about dining at the Paros. You are positioned at the crossroads of the Latin quarter neighborhood and get an eagle’s eye view of the foot traffic that passes through the medieval streets of one of Paris’s oldest neighborhoods. Sure, it’s touristy, beneath the layers of glittering lights and Greek bouzouki, remains centuries of foreign footsteps.