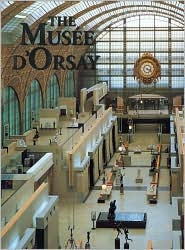 After the Louvre Museum, the Musee d’Orsay, is perhaps one of Paris’s most popular museums with visitors. Representing French artists and sculptors’ works produced between 1848 to 1914, this unique collection includes many of the Impressionist masters such as Monet and Renoir, but also the Romantic and Realists, the Nabists, the Symbolists and the Fauvists. The innovators of the day are placed in direct contrast to the ‘official’ artists such as Ingres, Bouguereau and Delacroix to give you a good idea how the painting styles differ, and to judge for yourself the merits of such varied perspectives. The second floor devoted to sculptors of the same era deserves a close look as well – so don’t rush to the third floor to see the Impressionist collection without a pause to appreciate Rodin’s Porte d’Enfer (Hell’s Gate), Maillol’s nudes, or the mirth-filled faces of Carpeaux’s muses.
You may already know that the building housing Musee d’Orsay was formerly a train station destined for demolition in the 1970s. If you’ve noticed the semi-circular windows at the top of the building, would you have also guessed that they were installed to allow the escape of rising steam from steam-powered train engines? Or could you imagine that long before the train station, the intended purposed of this building site was a palace for Queen Margaret de Valois – better known as Queen Margot, the first wife of Henry IV?
Even though I’ve visited the Musee d’Orsay many times, Alexandra Bonfante-Warren’s book The Musee d’Orsay offers plenty of fascinating details about the museum and the 19th and early 20th century artistic movements in France. Rather than simply give you the dry descriptions of what she describes as the ‘isms’ Impressionism, Romanticism, Realism, she places all of the artistic movements in a historical context.
Just to give an example, here’s a trivia question: What invention made painting ‘en plein air’ or outdoor painting more practical for artists?
Bonfante-Warren explains how the invention of the collapsible paint tube in 1841 allowed paintings to be completed outdoors. She goes on to explain how the discovery of brighter pigments and synthetic colors brought new colors to the artists’ palettes. Brushes and palette knives also came in new shapes.
After reading The Musee d’Orsay, you’ll have a very good idea of 19th and early 20th century Parisian relationship to the arts as well as some of the technology and political events that helped create the art you can now enjoy and appreciate in the gallery. Why is this museum so important? Obviously the Impressionist collection is the star attraction, but I also think the Musee d’Orsay is a mirror reflection of today’s Paris in many ways. A huge proportion of the buildings and monuments people come to see and photograph were products of the late 19th-century. Little remains of medieval Paris and although the 20th century made some inroads – Centre Pompidou, Montparnasse, the Bastille Opera, and the Bibliotheque Nationale, the Haussmannian boulevards, the Opera House, the Eiffel Tower, the Arc de Triomphe, even the Notre Dame we see today, are all results of 19th-century architects, builders and and restorers.
Musee d’Orsay Visitor Information
The Musee d’Orsay is located directly across the Seine River from the Tuileries gardens and the Louvre. You can easily walk across the bridge from the gardens.
1 Rue Legion d’Honneur
Metro: Solferino, Assemblee Nationale
Closed Mondays
Buy Musee d’Orsay tickets online
www.FNAC.com
Admission: 8 Euros
Combinatin card with Rodin Museum: 12 Euros
Reduced Rate: 5.50 Euros Thursday evenings and after 5 pm
Hours 8:30 am to 6 pm except Thursdays till 9:45 pm.
Free admission on the first Sunday of each month.
Free admission Age 18-25 on Thursday nights until June 30th, 2008.
Free admission Age Infants to 17.
Free access to handicapped and assistants.
Eat your lunch at the Museum cafe or have a hot chocolate or tea at the ornate tea salon located on the museum’s second floor. The food is excellent in either the cafe or the salon.