December 1st! French Treats to ring in the Holiday Season 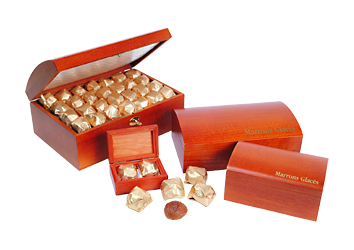 Remember that guy who was so hopelessly in love that he spent the twelve days of Christmas thinking of bigger and better gifts to impress his ‘own true love’. These extravagant ‘gifts’ or productions ranged from golden rings and drummers to a partridge in a pear tree.

You certainly don’t need to stage a Cecil B. DeMille fanfare to share your love and affection during the holiday season. Sometimes just the simplest of gestures conveys your feelings. What better way to evince the romance of the season than by searching for a little French inspiration? With that goal in mind, Parisgirl would like to share with you Parisgirl’s Top Twelve French Noel Treats as we count down the days to Christmas, Hanukkah and New Year’s Eve.

Maybe one of the reasons why I love the flavor of chestnuts so much is because it reminds me of home in upstate New York just as much as the busy intersections at Montparnasse where chestnut vendors continue to sell freshly roasted chestnuts for a few Euros.

The translation for chestnutsin French is ‘des marrons’ – not to be confused with ‘marrant’ which means hysterically amusing. Although candysellers specialize in glazed chestnuts (marron glaces) during the holiday season, I’m something of a purist here – the flavor is already rich enough without adding sugar but while you’re in France, be sure to try some chestnut flavored desserts such as chestnut puree filled crepes, or sundaes with chestnut syrup.

You can find the sweetened chestnut filling, or a chestnut spread resembling Nutella – at most supermarkets (including Monoprix). You can make your own sweetened chestnut filling following Mary Jose’s Creme de Marron cooking lesson. The filling lasts for a year and can be used as flavoring for crepe fillings or even as an addition to whipped cream – as it was used for this week’s French recipe at the Paris Culinaire site: