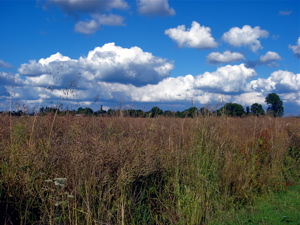 Once you get a taste of Impressionism at the Musee d’Orsay, the Orangerie, or the Musee Marmottan in Paris, there’s no substitute for getting out to the Norman countryside to see for yourself the landscape of ever-changing light that so inspired the Impressionist painters. In fact, you may even decide that no painter can really do justice to the orchards, forests, and pastures. At times, the late summer light virtually ignites fields. A Norman day can start off gray and dreary and totally surprise you with a sunset fanfare.

There’s no better time to visit Normandy than September and October when you might linger in sun-dappled apple orchards.

Hop on the A13, Direction Rouen and start your journey with a pause at Claude Monet’s house and garden in Giverny (near Vernon). Giverny is located in the Eure Departement of Normandy which is considered one of the more rural and less developed regions.

For this reason, you’ll also find a number of well-preserved medieval towns such as Bernay and Cormeille that are not as well known as some of their equally charming counterparts such as Honfleur and Bayeux in Calvados. (All of these towns are well worth a detour). 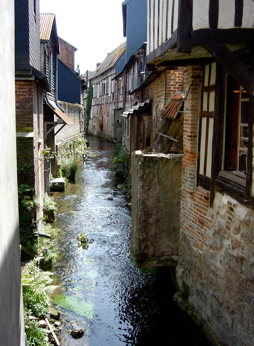 Recently, we stopped off in Pont Audemer as part of our 6-Day’s in France tour with friends (Parisgirl is not a tour guide – but we love taking friends to places that are special for us after having lived here for twenty years!) 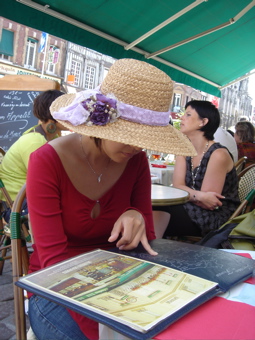 Pont Audemer is called the ‘Venice of Normandy’ which might be overstating its case –but there’s no question that the town is chockfull of charm. Complete with 16th century artistocratic townhouses, a twice-a –week market, and a medieval fair in the summer, it’s also a great meeting point for local Norman artists. Located in Upper Normandy, bordering Calvados and Eure Departements, Pont Audemer lies between Rouen and the port towns of Honfleur and Trouville. The fact that it lies inland from the coast may be part of there reason it remains much less frequented by tourists.

A magical event – Kaleidoscope– an exhibit of local artists including Marie France Levillain, Rene Kerever and Mijo Demeuron(who Parislogue readers will remember from a past exhibit in St. George de Vievre) will open this August 23nd 2008 until August 31, 2008 at the Galerie Theroulde (just behind the St. Ouen Church).

I guarantee that if you spend some time wandering along the narrow side streets of Pont Audemer (a Roman port town) or Bernay in Eure Departement, you will begin to understand why artists are continually attracted to this intriguing region. (More on Bernay day trips from Paris in a future post!).

Getting to Pont Audemer from Paris

It takes approximately 2 hours driving time from Paris, direction Rouen (off of the Peripherique) toward A13.
You can take a train to Bernay or Rouen, but you’ll need to connect to a shuttle bus system. Pont Audemer has no direct train service from Paris.