Visiting the Reporters' Memorial in Bayeux 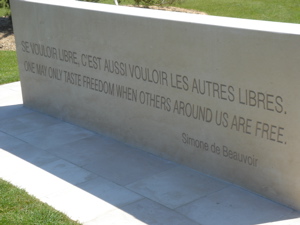 Among the many sights in Bayeux worth making the trip for, here’s one you may not know about – it’s the Reporters’ Memorial.
Visitors to this part of France are probably well aware of the nearby D-Day Beaches in Normandy and the many war cemeteries and memorials that dot the countryside – including the big British war cemetery in Bayeux. But Bayeux is also home to the Reporters’ Memorial, which is one of the few monuments of its kind in Europe. This is a memorial walkway dedicated to reporters who’ve died while doing their job.
You may have seen Robert Menard’s name mentioned in the news for the past few weeks. President of Reporters without Borders. Although his name has most recently been associated with the recent Olympic flame relay protests, almost a year ago, Robert Menard represented Reporters Without Borders at a moving inauguration ceremony for those reporters whose names are carved in the stone markers of Bayeux’s extraordinary remembrance.
At that time, (May, 2007), Menard had just returned from Iraq. Those that attended this ceremony were the husbands and wives, parents, children, grandchildren, and coworkers of reporters who have died in all corners of the world.
Just looking over the internet listings of past stories on Robert Menard and Reporters Without Frontiers (i.e. RSF unmasked) it is clear that the organization has left few corners of the world exempt from its searchlight (including France!). Those that attended the ceremony last May, 2007 should have a betterr understanding of the organization’s commitment to helping reporters work – free from fear, imprisonment and retribution. 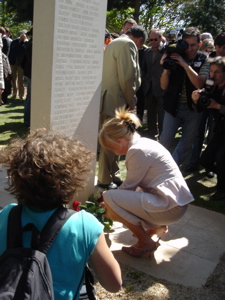 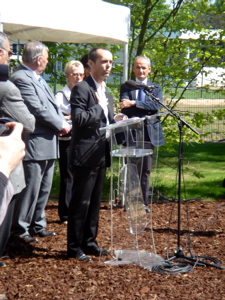 photos, top to bottom: Reporters Monument, Bayeux; Linda Douglas, widow of CBS cameraman Paul Douglas, places flowers on the marker; Robert Menard at the Reporters’ Monument, Bayeux, May 2007 – all photos by Chris Card Fuller, 2007, and may not be used without permission