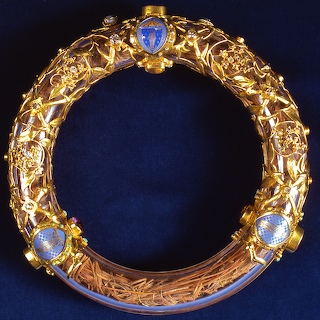 Paris is a great place to spend the Christmas holidays or ring in the new year. What better place to start your celebration than the Notre Dame Cathedral? If you happen to be in Paris for the 1st weekend of December (also known as the first week of Advent), you should make your way to the main entrance (le parvis) of Notre Dame Cathedral where they’ll be lighting the 20 meter Christmas tree. This year (2007), it will be Saturday and Sunday, December 1-2. You can also go inside to see the Christmas creche or manger. All year round, you’ll note that the polychromatic sculptures circling the altar tell the Christmas story.

For those that are interested in seeing what is considered by many to be one of the few relics from Christ’s era – the crown of thorns, you’ll want to visit Notre Dame on December 7th and 3 pm when the relic – the Crown of Thorns is brought out for veneration.

Claiming a relic back in the Middle Ages was the name of the game. One of the reasons for waging the Crusades included the great treasure hunt for relics. Relics happened to be anything relating to the crucifixion of Christ, be it nails from the cross, pieces of wood from the cross, clothes that he wore or or the crown of thorns that was placed on his head by Roman soldiers as a sign of ridicule. If you (being a religious order, a French king, etc) could claim a relic, you could build a great church and be sure to have plenty of pilgrims knocking on your door. Relics were power – the way today – having oil is power. If it weren’t for relics such as these, we wouldn’t have the resulting masterpieces of architecture such as Notre Dame and especially neighboring Sainte Chapelle.

Aside from Notre Dame Cathedral, be sure to stop in at the Madeleine to see the Japanese creche.

If you’re looking for Christmas markets, you’ll find them at several church squares around town including Saint Sulpice, St. Germain-des-Pres, Place de la Nation in the 11th. There are also a number of Christmas villages set up for the holidays (including Bercy Village). Outiside of Paris, you’ll also find a Christmas village at La Defense and Eurodisney.

Montparnasse station’s skating rink will be up and operating again for the Christmas season.

Be sure to check out Paris Info’s listing of major Christmas markets in and around Paris.

Notre Dame Cathedral’s official website is in French, but they do have a calendar of events for December Christmas services and concerts which is very useful.
Did you know that Notre Dame Cathedral offers free guided tours in several languages? The English language visit is offered on Wednesday and Thursday afternoons at 2 pm and Saturday afternoon at 2:30 pm.

Regarding the Christmas tree:
Notre Dame Cathedral’s official website explains the Christmas tree ornamentation in this way. Originally the ‘Christmas tree’ was part of a teutonic ritual. It’s said that Saint Boniface used the triangular shape of the Christmas tree to explain the concept of the Trinity. Hmm, that sounds like St. Patrick using the clover leaf for the same purpose.

The pine tree is also supposed to represent the concept of eternal life – being evergreen, even in the dead of winter. Whatever your beliefs, breaking up the cold and dreary winter months with merrymaking seems to make good sense. Traditionally, the three weeks preceding Christmas day were meant to be a time of abstinence – so all of you Christmas party-goers on jumping the gun. But, hey, life is short. Enjoy!