While the idea of Christmas for some people can only mean going home and surrounding oneself with family and friends, for other people Christmas is the ideal time to get out of town and travel. It’s particularly appealing when you consider that a city like Paris is decked out in all its holiday finery, making it even more beautiful than normal. So for those of you who are thinking of visiting Paris at Christmas, these are the things you’ll need to know.
>> Find out what the weather in Paris will be like during the month of December, and learn more about what to pack for your Paris trip 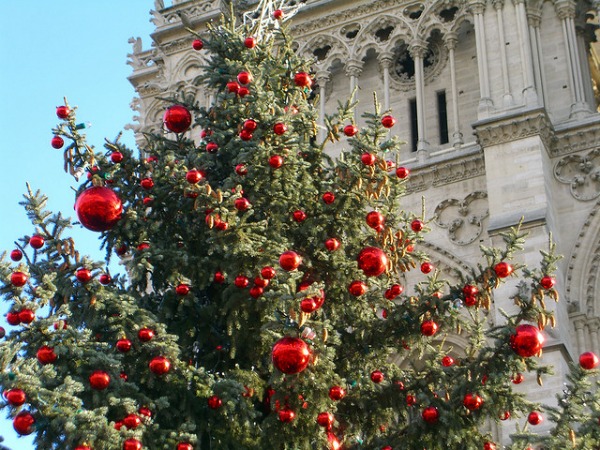 Christmas in Paris may not be snowy white, but it’s hard to not be filled with holiday cheer if you’re in Paris in December. The City of Lights lives up to its name in a big way, as the trees that line the Champs-Elysées are among the many trees in Paris that get covered with strings of lights, and the Eiffel Tower often becomes the focal point of the nighttime skyline with its shimmering lights. 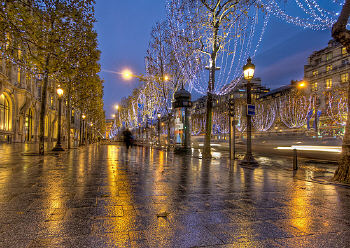 In fact, viewing the holiday lights in Paris is one of the top things to do when you’re visiting the city in December. The best places to go to check out the Paris holiday lights are along the aforementioned Champs-Elysées, along the Rue Montorgueil and Rue Mouffetard, in the Place Vendome, in the windows of the big department stores (including the well-known Galeries Lafayette), and at the Notre Dame Cathedral. It’s at Notre Dame that you’ll also get to check out Paris’ Christmas tree, and even if you’re not a religious person you could do worse than to attend a Christmas Eve service in the famous church. 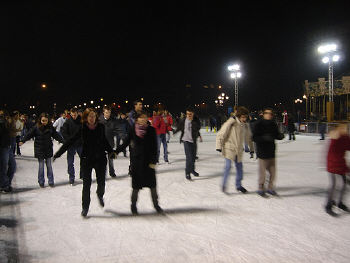 Another Christmas in Paris tradition is the temporary ice skating rinks that get set up around the city. The locations each year may vary, but there are often rinks put up in the square near the Paris City Hall, also known as the Hotel de Ville, and near Montparnasse. They tend to go up in mid-December and stay open through March, so even if you’re visiting Paris after Christmas you can still take a spin. Generally speaking, to go ice skating in Paris on these temporary rinks won’t cost you anything, but if you need to rent the ice skates that’ll be a few euro.
Attending a service in one of Paris’ many churches can be a really wonderful way to spend Christmas Eve, even if you’re not a super-religious person at home. And you don’t even have to speak French to get the most out of a service – there are several English-language services around the city you can take part in. Unfortunately, the website for the Catholic churches of Paris appears to be entirely in French – so you may need some help from a French-speaking friend to translate it and find the English services, or you could just ask the Paris tourism office when you arrive in the city. In addition to attending Christmas mass in Paris’ churches, you may also want to make a tour of the churches during non-service times in order to see the many nativity scenes they’ve erected for the season.
Christmas in Paris, as well as the rest of France, tends to be a family holiday – which means that rather than dining out and partying with friends, Parisians are more likely to be eating big meals in cozy apartments with family and partying privately. Still, for a traveler, Paris at Christmastime can still be magical – there’s a sense of quiet that you may not find in Paris at any other time of year (though don’t assume the streets will be abandoned or anything), and there’s something about the way a city feels when it’s preparing for a family holiday that makes it feel warm… No matter what the temperature is outside. 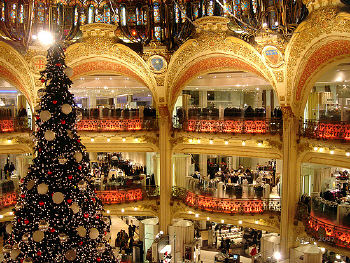 One of the biggest attractions for any visitor to Europe at Christmas is the abundance of Christmas Markets that spring up. Paris has several Christmas Markets that are worth checking out, even if you’re not a big shopper. And if you are? Well, I hope you brought an extra suitcase.
Many of the things you’ll find for sale in Paris’ Christmas Markets are holiday-oriented, from Christmas decorations to special holiday foods, but these markets are also good for treats that are great year-round. Some of the more popular markets in Paris are near Saint-Sulpice church, on the Place Saint-Germain-des-Pres, under the Grand Arch in La Defense, and on the Champs-Elysées. Although the article was published in 2007, this list of Christmas Markets in Paris (and accompanying map) is a great start to your market-going travels. Generally speaking, you’ll find the Paris Christmas Markets open from mid-November through the end of the year, but these don’t tend to last through the rest of the winter – so get your market fix while you can.
And if you didn’t find what you were looking for at any of the Christmas Markets, then don’t be shy about heading into the many department stores and boutiques in Paris – shopping is one of the many favorite pastimes of a Parisian, and shopping in Paris at Christmas is a delightful experience no matter where you come from. Aside from the lights that decorate many department stores in Paris during the holidays, you’ll also find that shops tend to stay open longer hours in December to make shopping easier on you. Plus, be sure to check out the window displays of the bigger shops – they can be just as good as what’s inside. 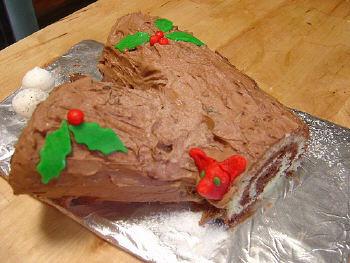 The main meal eaten during the holiday season in Paris – and throughout France – is called Reveillon, and it’s a long meal served either after Christmas Eve Mass or just after you ring in the New Year – or both! The word réveillon comes from the French word réveil, meaning to wake, because part of the tradition of this meal is that it doesn’t begin until midnight or soon after. These traditional Christmas dinners in Paris tend to be private affairs with family and friends, but if you have friends in Paris (or can make some quickly) you may just be able to experience this incredible meal firsthand.
Eating in Paris any time of the year can be an incredible experience, but at Christmastime there are certain treats you shouldn’t miss – even if you don’t get an invite to a reveillon dinner. Many of these foods seem to be just as focused on keeping you warm as they do tempting your tastebuds, but they accomplish both tasks handily. 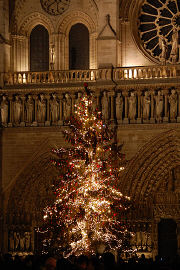 >> Find out more about visiting Paris at Christmas with kids in this post by our friends at Ciao Bambino.
>> WhyGo France has a great article about Christmas in France, including the author’s own recollections of her French Christmases growing up.
original photos, from top to bottom, by: nunocalvin, Stuck in Customs, sagarmin, adam5t, carabou, and Naixn