Cheap Winter Airfare to Paris from the US 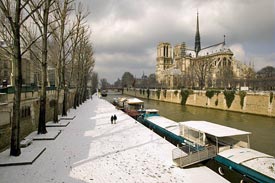 Travel to Paris from the United States is usually on the more expensive end of things, especially these days with the pathetic exchange rate. So getting a good deal on airfare is a great start to a vacation in Europe that doesn’t break the bank – which is why these deals on winter flights to Europe are going to make you so happy.

The Cheap Ticket Links blog has posted a note about travel deals to Europe from the US, so no matter where you’re coming from or where you’re going (Paris or beyond!) you’ll probably be able to find a great deal on airfare.

Okay, traveling to Paris in the winter isn’t everyone’s idea of a dream vacation, I know that. It’s cold, could be raining or snowing, you’ll need to pack more and heavier clothing, an evening cruise on the Seine doesn’t sound as appealing, and a stroll through the Tuileries isn’t going to be the sunny and romantic experience you might have thought. But here’s the thing – once you’re inside the museums, you won’t know what the weather’s like outside anyway. And sipping an espresso in a Parisian cafe is that much more satisfying when the steam from the cup is warming your hands when you’re on a break from shopping.

See? Winter travel to Europe is sounding better and better, isn’t it? And here’s the kicker – there won’t be as many people there, so you won’t have to fight the crazy crowds. Get your cheap airfare to Europe and start planning your Paris vacation today.