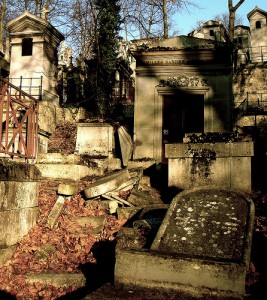 It’s happened to the best of us: We find cheap tickets to Paris, jet off on vacation with dreams of discovering the hidden delights of the City of Light – and come back with a hundred photos of the Eiffel Tower. And, that’s fine. It’s an icon and I’d defy anyone not to be awestruck upon seeing it in person for the first time. But, if you’d like not to bore your family and friends with a hundred photos of the Eiffel Tower, may I recommend haunting the cemeteries of Paris for some Grade-A original vacation pictures of Paris?
There are so many reasons to visit even the smallest cemeteries in Paris: First of all, they’re not packed with obnoxious fellow travelers like the “big” sites are. Second, they are usually a quiet relief from the hustle and bustle of the world’s most visited city. Third, they are a fascinating look into a usually forgotten piece of Paris’s history, architecture and relationship with its residents.
Finally, and especially if you’re an American, Parisian cemeteries are downright exotic and gorgeous. These crumbling mini-mansions of the dead feature some of the finest artisan detail work in the city – making even the majestic Paris hotels look like a bunch of bread boxes. Even more striking are the humble gravestones marking the places of those who made significant contributions to the world they left behind. What you won’t find, though, is a pasture-like landscape dotted with stones. These cities of the dead have “homes” of varying heights, and all the action takes place pretty much above ground. Also, depending on the age of the cemetery, there seems to be little rhyme or reason to how they’re laid out. 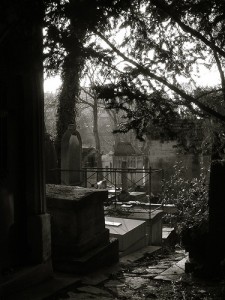 Père Lachaise, Montmartre and Montparnasse cemeteries are the most famous in Paris, but there is a cemetery in almost every arrondissement – and they all have something that will have you reaching for your camera, whether it’s the afternoon light on a cross, a rain-stained weeping angel or a name or date that may be familiar to you.
It’s also a great opportunity to play with all those features on your camera that you never bothered to learn – from black and white shots to over-exposures and panoramic views, many an amateur photographer have found Parisian cemeteries to be prime playgrounds for creativity. And while you’re there, you’re sure to see moping, emo poets scribbling in notebooks, sketchers capturing the juxtaposition of light and dark, and, particularly near Jim Morrison’s grave at Père Lachaise, a thoughtful chord or two being strummed on an acoustic guitar.
Keep in mind, though, that not everyone buried in these cemeteries are long gone – these are functioning cemeteries for Parisian residents, so if you see someone paying their respects put the camera, notebook or lute away and let them have their moment with their loved ones.