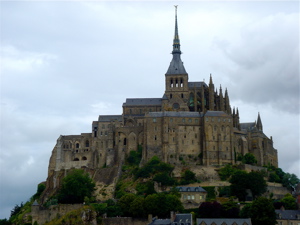 Adventure travel is closer to Paris than you think. It takes only 3 1/2 to 4 hours to reach Mont Saint Michel in Normandy. It’s located approximately 225 miles to the west of Paris.
Listed as a World Heritage Site, this 8th century monastery built on a rock off the coast of Normandy is not only a cultural landmark but an environmentally fascinating phenomena. Surrounded by a vast bay who’s shifting sands can turn easily turn into quicksand, this is no place to explore unless you’re guided by a knowledgeable local guide (as we were with Stephane Gueno of Sport-Evasion Tours). 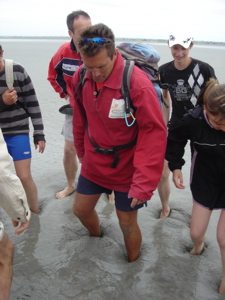 If you’re not caught in the quicksand, there’s always the risk of miscalculating the swift arrival of high tide. Gueno describes the high tide as rushing in with the added elan of a mini-wave – or a mini tsunami (which you can ride in on a kayak for a good thirty minutes). Who would have thought it possible to surf in Normandy? The arrival of high tide is most spectacular during the spring and fall grand equinox.
So, after years of warning visitors, “Whatever you do, don’t EVER set foot on the mud flats surrounding the Mont Saint Michel promontory”,here I am, bringing my dearest friends out for a hike with a guide who has assured us that, we will MOST DEFINITELY have an opportunity to step into quicksand. (I am certain this trip will become an instant bestseller with the Boca Raton crowd). 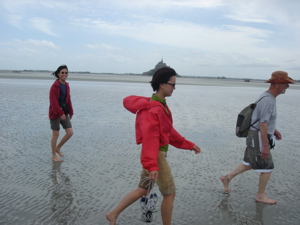 Chris and I have actually crossed the bay on several occasions to participate in a 40 km walkathon called Le Bleu et Le Vert (i.e. Water and Sea) which benefits a local school association. Those walks were carefully supervised also.
Nevertheless, Stephane tells us that each year, at least three people manage to become statistics, often by miscalculating the time necessary to return from Ile de la Tremblaye (a neighboring island) to Mont St. Michel and the causeway. During our brief two and a half hour walk, there’s no chance of us becoming statistics. First of all, the difference in tide levels is listed only as ‘moderate’ here in June. The difference in high and low tide can be as much as 15 meters on some occasions. 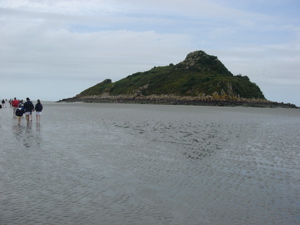 Our walk takes us out to Ile de la Tremblaye which is also a bird refuge. At certain times of the year (such as now in June) visitors aren’t allowed to walk on the island during egg-hatching. There is also one flamingo (escaped from a Jersey zoo) who’s taken up his residence at Mont St. Michel. We get to cross the Couesnon River two times (this is the river that supposedly separates Normandy from Brittany — at least according to tradition). It’s on the return part of our trip that our guide chooses to treat us to the quicksand experience. Once he finds a likely spot, he invites us all to jump up and down at the same time. This trampoline effect definitely causes the ground beneath us to respond, as if we were jumping on a goose-feather pillow. We’re up to our ankles when my battery drops out of my camera. One of the nice ladies in the group snatches it out of the quicksand for me – meanwhile everyone is now up to their knees – I step back from the quicksand to preserve the moment on film (lame excuse!).
Diana and James are now learning how to save themselves from quicksand – by shaking out one leg and BENDING THE KNEE. You use the bent knee as a prop for twisting out the second leg from the mud. That, my friends, is the key. By the way, do not try this on your own. 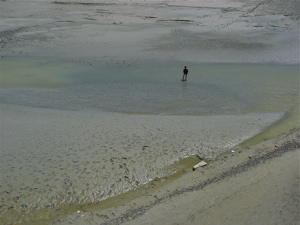 You’re probably wondering what’s the big deal about walking around in the mud. I keep asking myself that question every time I start off from the causeway – because the first 25 meters are REALLY muddy, and SLIPPERY. Depending on the time of year and time of day, it can also be so cold that your feet feel totally numb. But once you get past the slippery part, you get the most incredible perspective of the Mont – which rises from the bay like a fairy tale. And much of Mont Saint Michel’s history is built upon legend.
You have to love the monk who came up with the idea of building this monastery back in 708. St. Aubert was the bishop of Avranches. One night, Arc-angel St. Michael appeared to him in a dream and asked him to build a church on top of the islet. St. Aubert ignored this dream. So, St. Michael reappeared in another dream – and this time, just to drive home his point, he burned a hole into St. Aubert’s skull with his finger. Now that’s a way to get someone’s attention.
The majority of tourists visiting Mont Saint Michel head straight for the city built around the monastery promontory. You can reach the Mont via the causeway without ever getting your feet muddy (but it’s not as fun!). If you do visit the Mont, don’t get bogged down in the touristy shops in the lower city. Head toward the top of town where you can take a guided tour of the gothic monastery (the original Romanesque abbey was destroyed by a Breton ally of the King of France. The English failed to definitively capture the abbey during the Hundred Years War and two of their canons were left behind in their rush to head back to Tremblaye Island before the high tide came back in.
Although we didn’t have enough time to visit the monastery AND walk in the mud, the visit to the monastery is also worth the huge number of steps you’ll have to climb to get there. Practicing Catholics will be interested to know you can attend Mass daily at 12 noon.
It’s possible to book a hotel room for an overnight on the island (La Croix Blanche, for example has hotel rooms and a restaurant).
We almost got a room for the night when we were actually just looking for lunch. Chris asked the waitress if she had ‘room for five’. She told him to wait and looked for her hotel manager. He returned several minutes later and shook his head apologetically, “No, we’re sorry but we don’t have a room available for tonight.” He looked at us a little strangely until he realized we just wanted a table, not a ‘room for five’.
If you’re wondering why I’m made such a big deal about getting our friends out to walk on the Mont Saint Michel bay, it’s simply because after this season, it MAY NEVER BE POSSIBLE to do this really great walk out to Ile de la Tremblaye. A huge Mont Saint Michel Bay dam project is already underway which will change the aspect of the bay. The goal is to create a ‘more aesthetic aspect’ which will essentially allow the Mont Saint Michel to be totally encircled by water (with the exception of the causeway). The projected completion date for the dam is 2015. Stephane Guano said he will continue to conduct walking tours for as long as he can do so. Get to see this great sight while you still are allowed to walk in the mud. You’ll never forget it.
For more info on walking tours and prices:
Contact : Stéphane Guéno
www.sport-evasion-fr.com
1, rue de Tombelaine
50300 Le Val Saint-Père
Tél. : 02 33 68 10 00 / 06 14 70 55 14
All photos by Chris Card Fuller ©2008