Budget Paris Hotels in The Marais Near the Place des Vosges 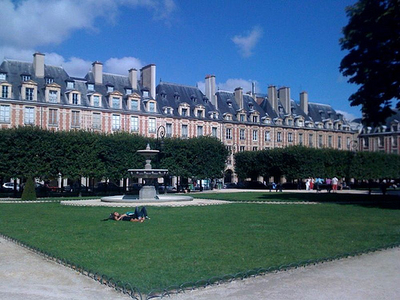 As I was writing the overview of The Marais neighborhood recently, I was flooded with memories of my first trip to Paris when my cousins whisked me around the city in their tiny car (yes, I feared for my life several times, especially as we circled the Arc de Triomphe). To this day, I’m not entirely certain where all they took me during that trip, but as I looked at pictures of the Place des Vosges I thought, “I know they took me there.”

The square is one of the prettiest spots in The Marais, and some would argue one of the prettiest in Paris – and although the Paris hotels in the area aren’t generally cheap, this is an ideal spot to book a room if you’re planning a romantic getaway and need a particularly romantic hotel in Paris. But even if you’re just planning a regular trip, choosing a hotel in The Marais helps you stay in a central area while also enjoying the charms of a lovely neighborhood.

Here are some of the budget hotels in The Marais near the Place des Vosges – they’re plotted on a Paris map below, along with the picturesque Place, and you can click on each little icon to get more information about each one or scroll further down the page to read more about each hotel as well.

And by the way, hotels right on the Place des Vosges come at a hefty price, so I haven’t listed those here. There’s one “splurge” listed below, though even it’s still relatively reasonable for the location.

Budget Hotels in The Marais Near Place des Vosges

Bargain Hotels in The Marais 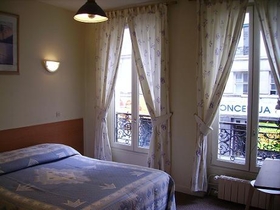 Although the Hotel de la Bastille gets listed on hostel booking websites, it is actually budget hotel. Every room has a private bathroom (one previous guest even reports having two bathrooms in his room!) as well as a TV. The building also has an elevator.

There are 20 rooms in the Hotel Bastille, which is located a 5-minute walk from the center of The Marais and directly opposite the Bastille Metro station. Breakfast is available but not included in the price of the room.
>> Book Hotel Bastille in Paris

Hotel Aux 3 Portes
44 boulevard Richard Lenoir – 75011 Paris
While the Hotel Aux 3 Portes is located between The Marais and The Bastille neighborhoods in Paris, the pretty Place des Vosges is only 300 meters away from the hotel’s front door. The 2-star hotel is also near the Canal Saint-Martin.

There are 21 rooms in the hotel over three floors (no elevator), and you can get a room with a view over a nearby park if you ask. All rooms have private bathrooms, internet access is free, and there’s an on-site restaurant. Breakfast is available for an additional fee.

There are 36 rooms in the hotel – all of which have high-speed WiFi access, climate control, and private bathrooms. Guests can also enjoy satellite TV in their room, and WiFi in the air-conditioned lobby. Breakfast is available for an additional fee, and internet access (anywhere in the hotel) is also not free.

Reasonably Priced Hotels in The Marais

Hotel Pointe Rivoli
125 rue Saint Antoine – 75004 Paris
The Hotel Pointe Rivoli is in the midst of The Marais, a short walk from the Place des Vosges and right on Place Saint Paul. There’s a Metro station across the square from the hotel, which occupies a 17th century building – but the interior has been completely redone in a colorful, fun, & modern style, so from the inside you’d never guess at the building’s history.

The rooms at the Hotel Pointe Rivoli all have private bathrooms, air-conditioning, and flat-screen TVs, and WiFi is available throughout the hotel. Breakfast is available at the hotel, but is not included in the price.

Pratic Hotel
9 rue d’Ormesson – 75004 Paris
Located a few steps from the Place des Vosges, the Pratic Hotel is a great place to stay in The Marais without needing to pay a premium. The rooms are small, but the place is clean and the location is absolutely fantastic – especially at this price.

Some of the rooms at the 2-star Hotel Pratic come with a private bathroom, while in others you’ll share a bathroom. All rooms have satellite TV and are soundproofed, and some have a lovely view of the nearby Marché Sainte Catherine Square. Breakfast is available for a small additional fee.

The 20 rooms in the 3-star Hotel Jardins de Paris Marais Bastille all have private bathrooms, satellite TV, and air conditioning. The hotel has an elevator, WiFi and internet are available in the rooms as well as common areas, but breakfast at the hotel is not available.

A “Reasonable Splurge Hotel” in The Marais

Hotel Turenne le Marais
6 rue de Turenne – 75004 Paris
The Hotel Turenne le Marais is a few steps from the Place des Vosges in the heart of The Marais, and it’s the very stuff that (budget) Parisian honeymoons are made of. It’s a 41-room boutique 3-star hotel with all the romantic trimmings.

Each room at the Hotel Turenne le Marais has a private bathroom, cable TV, WiFi access, and double-glazed windows for peace and quiet. The rooms are lovely, although not opulent, so you’ll still be able to afford to go out on the town. Breakfast is available in the breakfast room or via room service.