Budget Hotels in Paris Near the Louvre 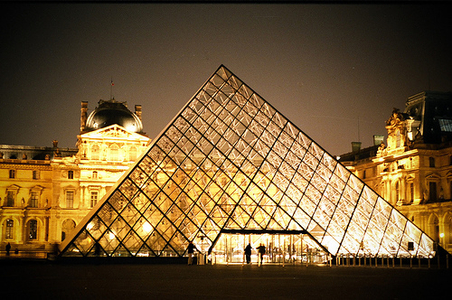 Anyone who’s done any pre-trip research on a visit to the Louvre Museum during their Paris vacation knows that the museum is enormous. So enormous, in fact, that many people make it a multi-day affair. They’ll take in one wing one day, and come back another day to tackle another part of the museum. Because if you’re really an art lover, you definitely don’t want to wear yourself out by cramming too much of a good thing into one day. What’s the best way, then, to make sure you’ll take your time and return for another visit? Book yourself into a hotel near the Louvre, that’s how.

Of course, Paris hotels near the Louvre don’t generally come cheap – any hotel near a major monument in any city around the world would be silly not to charge more for their rooms – but there are some places that aren’t far from the museum that can be considered budget hotels. And if you’ve saved money with cheap tickets to Europe, the last thing you want to do is spend too much on your hotel!

There’s a map of Paris below with the Louvre and each of the listed hotels marked; you can learn more about each hotel by clicking on the hotel icon on the map, or by scrolling further down to read a brief description about it.

Budget Hotels in Paris Near the Louvre

There are 40 rooms in the hotel, which was entirely renovated in 2008. All the rooms have air conditioning, en suite bathrooms, WiFi and internet access, private safes, minibar, and satellite TV. A buffet breakfast is available in the lobby, for an additional fee.

The rates for a double room at the Hotel Louvre Saint Honore range from €130-230, depending on the season.

The hotel has 56 rooms with en suite bathrooms, WiFi or internet access, private safe, and cable or satellite TV. Some of the single rooms aren’t air conditioned, but most of the hotel is (ask if you’re concerned about this). In nice weather, you can enjoy the hotel’s private interior patio.

Rates for a double room at the Tim Hotel le Louvre run between €90-170, depending on the season, and breakfast is available for an additional fee.

Pavillon Louvre Rivoli
20, rue Moliere – 75001 Paris
The Pavillon Louvre Rivoli hotel may be located a short 200 meters from the Louvre, but it’s on small and primarily residential street. And although you may not want to pay the extra cost for breakfast, if you do, you’ll get to dine in the cool former cellars of the building housing the hotel.

There are 29 rooms in the hotel, all of which have en suite bathrooms, air conditioning, minibar, private safe, and satellite TV. WiFi is available in most rooms. Internet access is available in the lobby, as are free international newspapers. As mentioned, buffet breakfast is available for an additional fee.

A double room at the Pavillon Louvre Rivoli hotel runs from €100-290, depending on the season.

Tonic Hotel du Louvre
12-14 rue du Roule – 75001 Paris
The Tonic Hotel Louvre is roughly 300 meters from the Louvre Museum, sort of behind the palace as you’d be heading toward the main islands in the Seine. It’s a great point from which to base yourself for a Paris visit, even if you weren’t planning return trips to the Louvre.

There are 35 rooms in the hotel, all of which have en suite bathrooms, air conditioning, minibar, private safe, satellite TV, and WiFi access. A buffet breakfast is available each morning in the breakfast room for an additional fee.

A double room at the Tonic Hotel du Louvre ranges from roughly €100-225, depending on the season.

Hotel Daunou Opera
6, rue Daunou – 75002 Paris
The Hotel Daunou Opera is located just off the Avenue de l’Opera between the Opera Garnier and the Louvre. It’s 500 meters from the Louvre, and a short two minute walk from the Opera. Also within walking distance is the Place de Vendome and the famous Galeries Lafayette department store.

The hotel, which was totally redecorated in 2005, has 50 rooms – all of them featuring en suite bathrooms, air conditioning, free WiFi, cable TV, a private safe, and a minibar. A buffet breakfast (which costs extra) is available in the breakfast room, and hotel guests also get international newspapers for free.

Rates at the Hotel Daunou Opera range from €150-180 for a double room, depending on the season.

These budget hotels near the Louvre are actually across the Seine from the famous gallery, but still absolutely close enough to walk there. 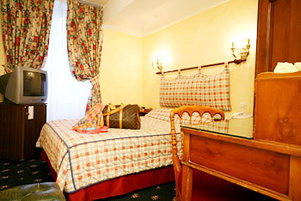 The stylish Crystal Hotel is in the Saint Germain des Pres neighborhood on the opposite side of the Seine from the Louvre Museum. It’s a ten-minute walk to the Louvre and the Musee d’Orsay, and 20 minutes on foot from Notre Dame.

There are 26 rooms in the hotel, all of which features en suite bathrooms, minibar, private safe, satellite TV, and internet access. WiFi is available in the lobby, as are free international newspapers, and a continental breakfast is available for an additional fee.

A double room at the Crystal Hotel runs between €100-215, depending on the season.
>> Book Crystal Hotel Saint Germain des Pres in Paris

The hotel has 59 rooms, all of which feature en suite bathrooms, private safe, minibars, satellite TV, WiFi access, and air conditioning. International newspapers are available for free. The hotel has its own on-site restaurant serving French and Italian cuisine, and you could luck out with a view from your room of the private interior garden.

Rates at the Hotel Europe Saint Severin for a double room range from €100-150, depending on the season, and buffet breakfast is available for an additional fee.

For a few more options in a higher price range, here are some more hotels close to the Louvre: