Bringing in the Chinese New Year in Paris's 13th arrondissement 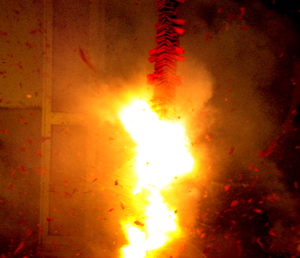 Photo by Chris Card Fuller ©2008
It may be the Year of the Rat, but in Paris’s 13th arrondissement, dragons were in abundance. The New Year began Thursday (Feb 7,’08), but Saturday afternoon, many of the businesses along Avenue de Choisy (Metro: Porte de Choisy) received visits from dragons of many colors to bring good fortune for the entire year. 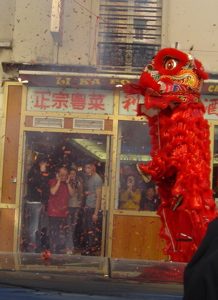 Photo by Chris Card Fuller ©2008
You can tell where a dragon has already passed because of the red confetti sprinkled along the sidewalk and you can tell when a dragon is about to arrive by the noise of drums and symbols which announces his imminent arrival. A smart shop owner will be sure to have a fresh green salad hanging from the second floor balcony. When the dragon arrives, he gives his blessing to the shop by taking a little stroll through the shop (and hopefully not breaking too much bric-a-brac in his wake). When he exits he stands up on his hind legs to reach bring down the suspended salad which he eats and then regurgitates into the shopkeepers bowl. If you’ve never seen a dragon eating salad, this is something not to be missed. 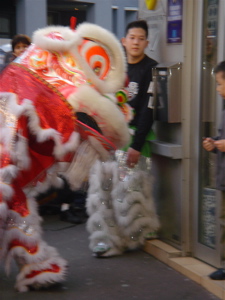 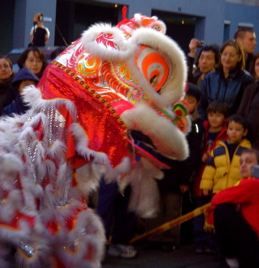 The feeding frenzy was contagious – feeling similar hunger pangs, Mark and Angelique took us to one of their favorite restaurants in the neighborhood (they have several). Restaurant Imperial Choisy, 32, Avenue de Choisy specializes in Chinese and Cantonese cuisine. To bring in the New Year, we would have liked to order a whole fish – but they were already sold out. Instead we tried their lightly fried softshell crab, salted crispy shrimp, and green spinach-like vegetable called ‘lisiere’ in French. 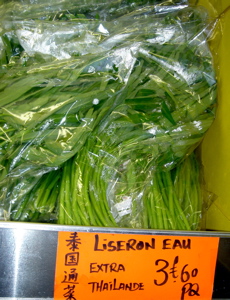 Photo by Chris Card Fuller ©2008
For twenty years, we’ve been coming to the 13th for authentic Chinese, Cambodian and Vietnamese meals. There are plenty of restaurants from which to choose. It takes about twenty years to begin to have an inkling of the variety and levels of quality. Angelique has suggested that the Imperial is one of those restaurants that is well-known by real fans of good Asian cuisine. I admit I was enthralled with the plate of soft shell crab. When the fish comes in, we’ll definitely be back for a second meal.
In the 13th, you can find family style dining or more ornate venues for special occasions. What is consistent is the price – a good meal will never break the bank. For a meal, including aperatifs, a main dish, rice and a bottle of wine, plan on approximately 45 to 50 Euros for two.
After dining in the neighborhood, if your Paris lodging has cooking facilities, you may want to stock up on Asian produce at the adjacent grocery store (Exo). You’ll find plenty of fresh mangos, durian fruit (either whole or sliced), and plenty of exotic green veggies such as dragon green beans, or dragon fruit.
For the dragon collectors, dragons of all shapes and sizes can be found in the Asian import shops. Once you’ve come to the 13th arrondissement for a visit, you’ll certainly find plenty of good reasons to return.
Restaurant Imperial Choisy
32, Avenue de Choisy
Metro: Porte de Choisy
Tel. 01 45 86 42 40