Book a Flight to Paris for the Early Spring 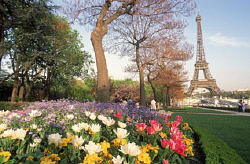 Paris in the spring is something quite special. This time of year in the city has been sung about and sighed about, so the only thing left for you to do is get there and sing and/or sigh about it in person. Even though it is not quite the height of the spring travel season in Paris, which means that maybe the weather will not be as perfect as it might be in April or May, going to Paris in March gives you a much better chance on finding a great deal on airfare to Paris. So if bringing along an umbrella is the trade off for saving a bunch of money on your plane ticket, is that worth it? We think it is!
Plane tickets to Paris (and many other cities in Europe) are much cheaper right now than they will be in even a month, because as the weather gets nicer, more and more romantic tourists come out of the woodwork and want to fly into this most romantic city. Get there ahead of the crush of tourists, when the streets might still be a bit damp, and take advantage of not only cheap flights to Paris but also cheaper hotel rates and often lower prices on tourist sights as well. Then you can get out of town before the onslaught of visitors really gets going.
Even aside from saving money on your Paris airfare, another great reason to visit Paris in March instead of later during the high season is that the lines at all the tourist attractions will be shorter and the sights themselves will be less crowded. Do you want to have to peek over the shoulders of the tourists in front of you to try to catch a glimpse of Mona Lisa’s smile at the Louvre? Or shuffle slowly in one direction (no room to turn around or even stop) in a circle at the top of the Eiffel Tower? No, you do not. And while Paris is so popular that it is never quite tourist-free, there are certainly times when you can visit this amazing city without feeling like the entire world is also visiting that day as well.
So, book yourself a cheap plane ticket to Paris and start planning your early spring Paris getaway today – you will be glad you did.