Bodies found in the Seine River 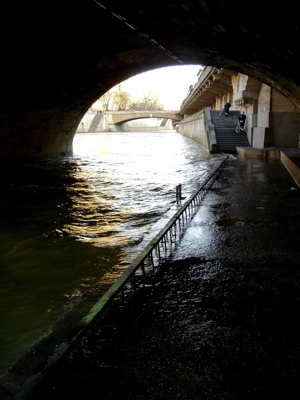 With the recent discovery of Super Model Katoucha Nian’s body in the Seine River this past Thursday (February 27th), that is the SECOND corpse to be dragged out of the Seine since the beginning of 2008. Earlier in January, an American man in his mid-forties also succumbed to the river.
In both cases, no suggestion of foul play has been made. Such may not have been the case for Ethel Brown, an American woman whose corpse was discovered on March 8th in 1906. Her death still remains an unsolved mystery. She was reportedly a wealthy women, and like Katoucha a woman of elegant stature.
Unlike the Brown, Katoucha would have been very familiar with the Seine. She lived in a houseboat on the Seine River, so it’s all the more surprising that she would have met death in such familiar surroundings.
One of the sad coincidences of these deaths is that they occurred at a time of year when not too many people are likely to be walking along the riverfront.
If you decide to stroll along the Seine, remember that once you fall in, it’s not so easy to get back out! There are a number of areas we discovered where you can walk so close to the edge that it would be far too easy to fall in, so enjoy the view -but mind your step.
Photo by Chris Card Fuller ©2008