Bicycling in Paris: How Safe is it? 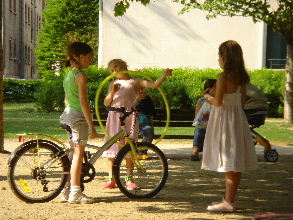 Photo by Chris Card Fuller ©2007
Today’s Le Parisien devotes several stories to the venerable bicycle and its new status – thanks to the City of Paris’s experimental ‘Velib’ short-term bike rental system. The group of stories headlined as “Who Has it in for Bicycles?” underlines the fact that not everyone in Paris is thrilled to be sharing the avenues and boulevards with ‘les velos’ or bikes. According to one Parisien report, a new sort of conflict between suburban automobile commuters and resident cyclists has developed.

One of the issues – regarding the risk of bicycling accidents in Paris traffic is being carefully studied by the city’s fire department.

Since the Velib system was installed, the Fire Department is keeping tally of bicycle related accidents. To date, the number of accidents in proportion to the increased number of bikes on the road does not appear to have changed drastically.

Some are even optimistic that an increased number of cyclists may eventually encourage automobile drivers to be more aware of their two-wheeled co-users of Paris streets.

As a tourist, you may be hesitant to go bike riding in a city where the traffic looks intimidating. I would have never considered biking on my own, but if you go with an organized bike tour (just to get a feel for how the traffic flows) this is a nice way to get started. The bike tour guides will often know the less congested parts of the city where you might even have some streets all to yourself – hard to believe, but it’s true).

Our guide at Paris a Velo, C’est Sympa warned us, “Don’t worry about the cars. Watch out for the pedestrians!” This was good advice, especially on market streets like Rue Mouffetarde.

Le Parisien also mentioned today that the police are being particularly zealous in handing out tickets for running red lights – to bicyclists. How much would you expect to pay for a ticket -called an amende? Would you believe 90 Euros for running a red light while riding a bicycle?

From a pedestrian’s point of view, reminding cyclists not to run red lights is a good thing, but 90 Euros sounds like an awfully high price to pay for someone who might not be able to afford very much. In this case, it would have been cheaper for the light crasher to catch a taxi.