Best Cafes in Paris for People-Watching

Paris routinely makes those “best places to people-watch” lists, and it’s easy to see why. Parisians take their cafe culture seriously, and the idea of grabbing a quick cup on the go just isn’t acceptable. Not only that, a quick glance at the tables and chairs spread out in front of just about any cafe taking up sidewalk space will tell you everything you need to know about what cafes in Paris are actually for: 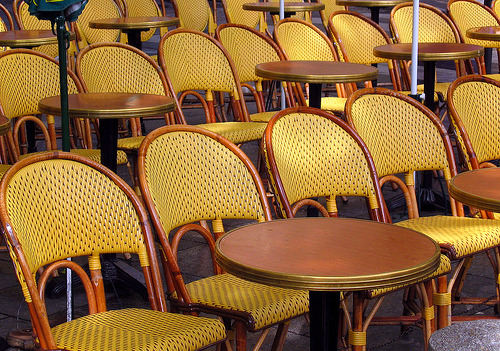 photo by Nelson Minar
See the direction all those chairs are facing? They’re not set up so that people can sit across from each other, sharing a chat over a cup of coffee or a glass of wine. They’re set up spectator-style so that each person gets to stare at passers-by. Oh, sure, you could move the chairs around if you wanted to when you sat down, creating a more conversation-friendly environment, but in Paris that’s just not done. People sit at the tables, side by side, and enjoy the excellent people watching.
But where are the best places in Paris for people-watching? Certainly it’s not just at any cafe with sidewalk chairs. Some neighborhoods offer better views than others, whether it’s a steady stream of interesting foreign visitors or the always-beautiful Parisians themselves. Here’s a list of some Paris cafes which offer the best people watching in the city.
Cafe de Flore 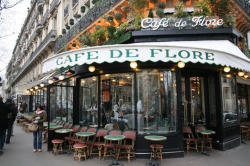 The Cafe de Flore has the advantage of being on a street corner, with one of the streets being a particularly busy and popular one, so that means there’s even more sidewalk space available for chairs and even more people buzzing by for you to watch. It’s in the lovely Saint-Germain-des-Pres neighborhood, and is one of the more famous cafes in the area (so don’t be surprised if you have trouble getting a table).
Cafe les Deux Magots 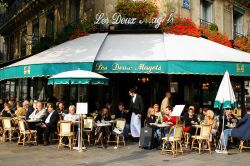 The other famous cafe in the Saint-Germain-des-Pres neighborhood is Les Deux Magots, which also occupies a street corner. This one is slightly more popular in terms of being a tourist attraction, so it’s even more of a challenge to get a table (especially in the high season). And if you do manage to get a seat, you’d better be prepared to fork over a hefty sum for the simplest of beverages.
Cafe Beaubourg 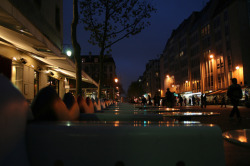 Whereas the Cafe de Flore and Les Deux Magots exude that kind of old-world charm many people crave when they travel to Paris, Cafe Beaubourg reminds visitors that Paris is very much a modern city, too. It’s not far from the ultra-contemporary Pompidou Center, and the cafe is decorated in a more contemporary style itself. Cafe Beaubourg is popular with locals as well as tourists, and the prices reflect its popularity. (No website; address 100 rue St-Martin)
Les Editeurs 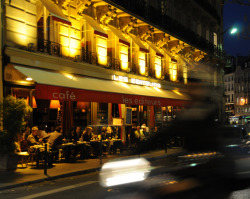 Yet another entry from the Saint-Germain-des-Pres neighborhood, Les Editeurs is a cafe and restaurant that’s not right on the big boulevard, but it boasts an exceptionally long “storefront” (if you will) that gives customers lots of space to spread out and lots of outdoor seats to choose from.
Cafe de la Paix 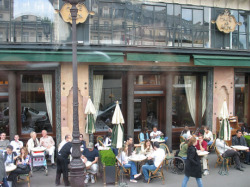 Getting back to old-world style, we have the Cafe de la Paix – opened in 1862 and designed by the same architect of the opera house just across from the cafe. And the opera house is one of the things that makes Cafe de la Paix such a great spot for people-watching – if you’re there before or after (especially after) an opera, you’ll have the perfect view of theatre-goers in their finery.
Fouquets 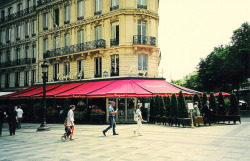 The next entry on our list has two things going for it in the people-watching department – it’s on a busy street corner, and one of the streets is the Champs-Elysees. Yes, that famous address means you’re likely to pay more than you should for whatever you order at Fouquets, but it also means the entertainment from street traffic will be non-stop. Remember that people will be looking at you, too, so this isn’t the place to go if you’re still in your white tennis shoes and carrying a fanny pack. (No website, address: 99 Avenue des Champs-Elysees)
Aux Folies

Aux Folies is a Belleville cafe that’s always busy, primarily with locals, and – unlike the famous cafes on this list – it’s not crazily overpriced. Because of the international make-up of the neighborhood it’s in, Aux Folies is great for people-watching on two fronts: the passers-by are interesting enough, but the other people enjoying a snack or a drink alongside you can be even more fascinating to watch (and listen to!). (No website, address: 8 rue de Belleville)
Cafe de la Rotonde 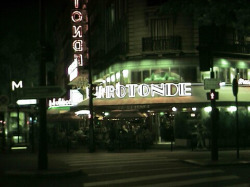 Located in the Montparnasse neighborhood, the Cafe de la Rotonde is another cafe that’s lucky enough to have a corner spot for maximum people-watching potential. The cafe opened in 1910, and was another meeting point for authors and artists living in Paris – including Modigliani, Hemingway, and Picasso, whose studio was not far away. (No website, address: 105 Boulevard du Montparnasse)
Cafe Bonaparte 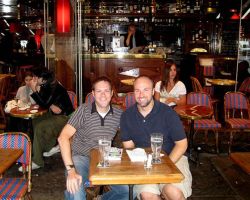 Cafe Bonaparte is another Saint-Germain-des-Pres cafe (are you sensing a theme here?), but unlike the other two mentioned at the top of the list this one is decidedly less of a tourist attraction. It still boasts the history of Les Deux Magots and Cafe de Flore, having hosted those artists and intellectuals of 1920s Paris, but this cafe isn’t as popular as the other two. That can mean there’s a less constant stream of people to watch, but it can also mean (a) you’ll get a table quicker, and (b) the people who do walk by will be interesting. (No website, address: 42 rue Bonaparte)
Le Sancerre 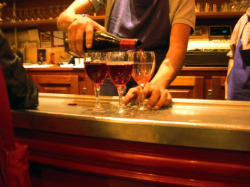 You’ll read that Montmartre was once the place to find Paris’ bohemian population. Nowadays, it’s more of a backpacker central and extremely touristy. Not far away, however, is the Abbesses neighborhood, home to the city’s present-day bohemians and Le Sancerre wine bar/cafe. Paris’ modern bohemians look a bit different than the bohemians of yesteryear, but it’s a colorful parade nonetheless. What’s more, the drinks are reasonable, too. (No website, address: 35 rue des Abbesses)
And if you want to find your own Paris cafe for people-watching?
This is by no means an exhaustive list of cafes in Paris that are great for sitting back and watching the world go by. The city is full of such cafes. If you’d like to wander until you find a cafe to call your own, the things to look for are: