Bathing Beauties (Les Baigneuses) Gustave Courbet: Does this painting belong to you? 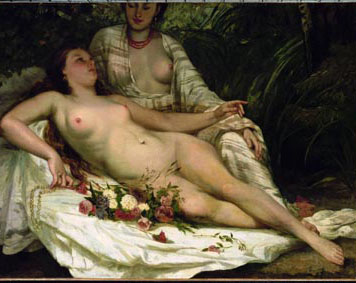 Sunday, October 26, 2008 is the last day that Les Baigneuses will be on display at the Jewish Museum of Art and History. The voluptuous painting is part of a brilliant temporary exhibit called ‘To Whom do These Paintings Belong?’

More than a collection of revered artists – from Manet to Dutch masters, it’s also a fascinating jigsaw puzzle – trying to piece together the provenance and the past histories of thousands of paintings pilfered by Nazis during World War II – or sold by their owners in forced or distressed sales.

What I learned by attending this exhibit was that, of the 60,000 objects and artworks acquired by the CRA (Commission of Artistic Recuperation) between 1944-1945, 45,000 out of 60,000 works were returned to their rightful owners! One woman who deserves a great deal of credit for her part in the restitution was Rose Valland. As curator of the Jeu de Paume museum (where many of the paintings were stored before being transferred to Germany), Valland took great risks in keeping track of teh looted artwork.

Another great breakthrough was the fall of the Berlin wall – which opened up the former Soviet controlled sector of Germany and allowed for even more works to surface. These included 28 paintings such as ‘Snow and Sunset’ by Claude Monet (on display at the exhibit), two Corots and a Gauguin – which were returned to the owners’ families.

The show also includes a video explaining some of the complexities of trying to get paintings back to their rightful owners, especially when some works have ended up as donations to major museums.
In conversations with museum curators, it was mentioned how the attitude is beginning to evolve about ensuring that rightful owners receive these works. Even just a few years earlier, the dialogue between museums and those seeking their family patrimoine had received less sympathetic ears.

Which brings us to the Baigneuses. No one knows exactly how this Courbet painting ended up in Ribbentrops’ possession. Is it yours? In the meantime, Les Baigneuses has found a temporary home at the Musee d’Orsay.