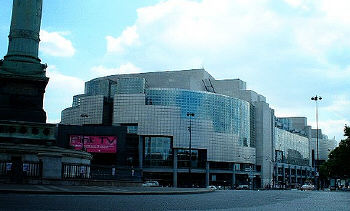 While many of us might hear the word “Bastille” and immediately think of the storming of the Bastille, the old prison in the center of Paris, nowadays the Bastille square where that infamous prison once stood is home to one of the more modern buildings in Paris – the Bastille Opera House.

The Bastille Opera, or L’Opera de la Bastille as it’s known in French, was opened in 1989 and is home to the Paris National Opera. The date the building was inaugurated was July 13, 200 years after the storming of the Bastille prison, but the glass-and-metal modern design in no way hearkens back to the former occupant of the square.

In 1986, then-President Francois Mitterrand held a contest for a design for a new opera house. The original plan was that this new opera house would replace the existing Palais Garnier, and more than 750 entries came in. The winning design was by a then-unknown architect from Uruguay, a man called Carlos Ott. The Palais Garnier was never closed, however, and both opera and ballet performances are still held in the Garnier facility.

Ott’s design for L’Opera Bastille has more than 2,700 seats, and the good news for opera fans is that every single seat in the house has an unrestricted view of the stage. Some serious opera aficionados have said the acoustics inside aren’t the best, but the facilities are quite modern and a night at the Bastille Opera is still an evening well-spent – if you’re an opera lover, that is!

Touring the Bastille Opera
If you want to check out the opera house without seeing an opera, you can take a tour of the building. L’Opera Bastille is open to tours Monday-Saturday (closed Sunday, May 1, July 14, and December 25, as well as during rehearsals & other special events, and also closed to visitors during the summer); guided visits are available only at 10am, 1pm, and 5:30pm, or by prior appintment. Tickets for a tour of the opera house cost €11 for adults, €9 for students, €6 for children.