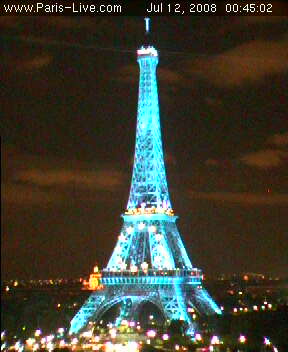 Eiffel Tower WebcamI promised you that there’d be more free fun on Bastille Day which is celebrated in Paris on July 14th. The French call their independence day ‘Le Quatorze Juillet’ or ‘The 14th of July’ rather than Bastille Day.

Outdoor dance parties begin on July 13th – Place de la Bastille will be one of the biggest, but Parc Andre Citroen’ Dance of the Century (Metro: Javel) also looks enticing. Traditionally, it’s the fire department (les pompiers) who sponsor neighborhood dances. The possibility for dancing in the street can be found in just about every Parisian neighborhood on the 13th & 14th when each firemen’s precinct opens its doors (check each precinct to confirm dates).

One of the highlights of the Bastille Day celebrations is the parade which begins at the Arc de Triomphe and traverses the entire Champs Elysees. One year we were lucky enough to catch this parade from one of th offices overlooking the Champs (thanks Eric!). If you’re into military parades and fanfare, this is a ‘can’t miss’. This year, a parachutist is expected to land at the end of the event.

Get to the Champs Elysees early on July 14th to stake out your place for viewing the annual Bastille Day parade. The TV camera crews will be setting up around 8:30 am and the President of the Republic, Nicolas Sarkozy arrives around 10:30 am.

Secretary General of the United Nations, Mr. Ban Ki-Moon is this year’s guest of honor at the parade.

July 14th – Paris is on holiday all day!

Some of the free events (2008) include a FREE concert, starting at 8:45 on the Champs de Mars (where you can also catch the free fireworks display). James Blunt is expected to be one of the guest performers at this event.

This year’s fireworks (2008) will be accompanied by music and huge screens. The closing dedication will honor opera singers Maria Callas and Pavarotti.

If you plan on going to the fireworks, get there EARLY. Even though the fireworks won’t begin before 10:30 pm, the free concert starting at 8:30 pm on Champs de Mars will create extra congestion.

If you want to avoid the Eiffel Tower fireworks crush, you have another option at the Longchamps racetrack (Metro: Porte d’Auteuil).
Galop-Longchamps is sponsoring a huge dance with DJs starting at sunset. There’ll also be fireworks.
France-galop.com
Reading Between the Lines

It really helps to read French when it comes to learning about FREE stuff in Paris. Parisinfo.com the official tourism site doesn’t bother to translate some of these Bastille day free events so I will do it for you:
(If you can read French, here’s the French version in detail)

Maybe one of the best moments of this holiday weekend will be your chance to capture a photograph of the Eiffel Tower in BLUE light. (In the past, for Earth Day, the Eiffel Tower was illuminated in GREEN light. Why blue? Blue represents the European Union of which France is a proud member.

Trivia Question: What do the three colors of flag of France represent? It’s more complicated than you might think! To find out the answer, read about the history of the French flag.