Best Nude Beaches in France: Baring it All 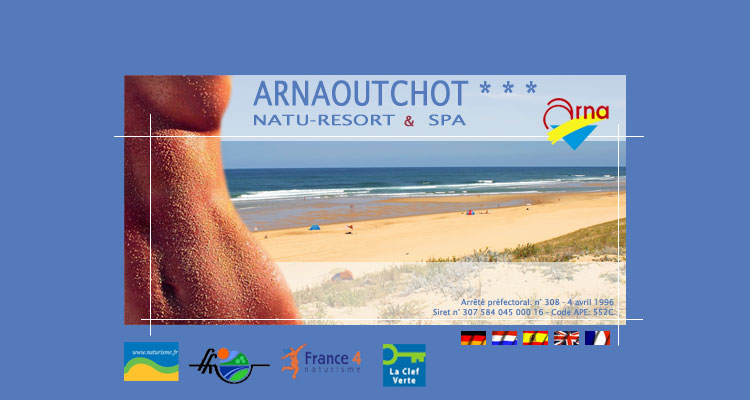 Paris Plage may be great in many ways – it’s a free man-made beach – available to Parisians who can’t get out of town for part of the summer – but still, you can’t swim in the Seine – and if you’re looking for topless sunbathers – you’re out of luck.

Contrary to popular belief, nude or clothing optional sunbathing and swimming isn’t ‘exactly’ legal in France. But this is the beauty of France. You’ll find that topless sunbathing is quite common at many seaside resorts. Voila the eternal paradox. A large number of clothing optional beaches and resorts are also easy to find – and to date, I haven’t ever hear of anyone getting arrested for topless sunbathing.

You’ll want to make sure that when you do find that perfect beach to commune with nature that the local community tolerates nudism. In French, the expression for the nudist lifestyle is ‘naturisme’. The best way to do this is to check out some of the ‘official’ or ‘tolerated’ nudist beaches like the ones listed below.

If you do decide to explore France’s nude beaches, please remember to leave your camera, video, binoculars, etc back at the hotel and respect people’s lifestyle.

Also remember that nudity in public places can risk a one year jail sentence or a 10,000 Euro ticket. I don’t know if anyone has ever been charged for nude sunbathing but you wouldn’t want to be the first!

These are just a few suggestions for a beach getaway from Paris. Enjoy your day or weekend in the sun – and don’t forget to bring your suntan lotion.

1. Vieux St. Giron is located in the Landes region, just north of Biarritz. Here’s where you can surf nude. The waves are intense and not very far from Arcachon beach which is well known for its surfing. Be careful of the undertow if you’re not a good swimmer. I’ve read in some reviews that the water was not clean one year. When we were there, the water was fine. Unlike Mediterranean sea beaches, you’ll find sand dunes and a very laid back atmosphere.
The above photo for Arnaoutchot Resort (better known simply as ‘Arna’ is located in Vieux St. Giron.
2. Cap d’Agde – well known throughout Europe, Cap d’Agde is actually a nudist seaside community with protected access. It has a three mile beach and can receive as many as 40,000 visitors in a season.
3. Berck sur Mer – Plage des Sables d’Opale (62) This is a family beach with a zone of 250 metres set aside for clothing optional swimming and sunbathing. Go just past the building in ruins along the dunes.
4. Merville-franceville – Plage de la Redoute (14) Calvados, Normandy. Prefecture has authorized nude sunbathing in a limited zone of 250 meters.
5. Fouesnant – Plage de Kerler (29) Officially authorized since 2004, Kerler’s natural beauty makes this a great place to experience memorable moments ‘en famille’.
6. La Turbale – Plage de Pen Bron (44) Nudism is tolerated as ‘clothing optional’. According to the naturiste association, the ‘textiles’ referring to those who choose to wear clothing tend to blend well enough with those who don’t.
7. Hossegor-Nudist Beach (40) Officially a nudist beach, starting at the boulevard facing the sea, take Avenue Gardian. The nudist beach starts just north of Camp WF.
8. Le Grau du Rois- Plage de l’Espiguette (30) An idyllic southern beach with a family feel. However, also with a gay section.
9. Corsica – Riva Bella (2A) Beautiful scenery and great facilities.
10. Plage de Tahiti – St. Trop Last, but not least, mention should be made of Plage de Tahiti which is NOT a nudist beach, however, it is considered one of the top beaches for spotting topless celebrities. After all, this is where it all began with Brigitte Bardot in St. Tropez, Paris’s summer party town.
Les Plus Belles Plages

>> Meanwhile, if you could care less about trends, here’s the list of top beaches hand-picked by one of France’s ‘naturisme associations’. I’m adding to that list one beach we chanced upon in our travels that is supposedly just the place for nude surfing.

History of Nude Beaches in France 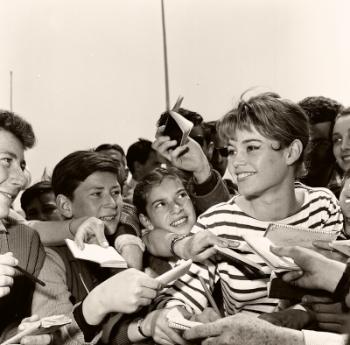 Topless sunbathing began as a fad way back in the 1950s when French actress Brigitte Bardot bared her breasts and shocked the world, but according to my Parisian friends who lived in Cannes during the 60s, topless sunbathing really took off in the early sixties for one simple reason.

“We were making our own macramé bathing suits. The tops were so easy to slide around to avoid getting tan lines. We eventually just took them off, but you know nowadays, topless sunbathing is simply passé!”

That’s the latest word from my Parisian contact (who should know). She does her sun-tanning at home. ‘Sure some people still sunbathe topless at Deauville, but . . .it’s no longer in style.”

Other Beautiful Beaches in France

France has plenty of beautiful beaches along its Atlantic coastline. If you’re fed up with trying to walk on the French Riviera’s pebble beaches, here some of our favorite Atlantic coast beaches: 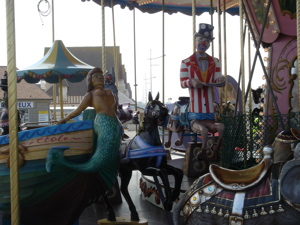 Both of these communities have excellent sandy beaches surrounded by extremely tasteful homes. These towns aren’t simply resort towns but family-oriented communities with high standard of living. Once you’ve visited Pornichet and La Baule, you may never want to leave! La Baule is considered by some to be the best beach in Europe.

L’ile de Re
An Island located in the Atlantic just across from La Rochelle, in the Charentes-Maritime, this is where the more discreet French hang their hat for the summer months.

Calanque D’En Vau
Not far from Marseilles, here’s where you can hang out and sip on a pastis while you play a game of ‘boules.

Mimizan,
Called the Pearl of the Cote d’Argent (Silver Coast) is located like St. Giron Beach in the Landes region, part of Aquitaine.

Carnac –
Located in Brittany. Though the beach town has expanded tremendously in past years, the beach is still sublime (according to this beach survey).

Perros -Guirec
Perros-Guirec (Perroz-Gireg in the Breton language) is also a Breton beach noted for its natural beauty and fine sand. It’s located on the Cote d’Armor.

Porquerolles
And, last but not least, if you really insist on being on the Mediterranean rather than the Atlantic Ocean, you can always head for Porquerelles island. Porquerelles is the most westerly of the Hyeres island chain.

Haven’t found the beach you’re looking for?
Check out a complete listing or click on Plagenat’s Map of France for nude beaches.