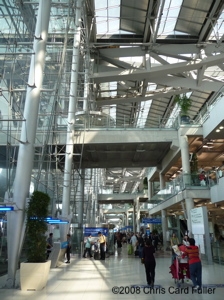 Sometimes you just have to wonder about angels. This past Saturday night we were boarding an Air France flight from Bangkok to Paris and by Monday, the Suvarnabhumi International Airport was closed down due to a serious power struggle which has embroiled government members, royalists, military and has much of the population concerned. Why we just narrowly missed this disaster which has left some wounded and thousands of travelers stranded – is one of the great mysteries. At some point, all of us who travel ask the question, not why me? But, why should we receive reprieve this time?

Sadly, an explosion at the Suvarnabhumi airport has caused at least two injuries and thousands of passengers are stuck in Bangkok. If you had been at the airport just this past Saturday, as we had been, there had been absolutely no signs of what was to come. Only an intense calm before the storm.

Likewise, although we were well aware of the protests and bombings in downtown Bangkok, you’d hardly feel the effects of any of these events if you’d be staying at the Novotel Suvarnabhumi Airport Hotel just a few days earlier – but the airport seemed far-removed from demonstrations held in downtown Bangkok. Security at the hotel has been tight for the past weeks- we noticed three weeks earlier (when we stayed at the same airport hotel) that the outdoor guards glanced underneath the vehicle when we arrived from an afternoon outing.

So, if today, you happen to find yourself stuck at the Suvarnabhumi International Airport en route to Paris, I highly recommend you find respite at the Novotel Suvarnabhumi Airport Hotel (if it’s still possible to book a room!) You can actually walk through the airport garage to the hotel, but there’s also a FREE Airport Hotel shuttle at Exit 4. (at least we could walk across the garage three weeks ago (I don’t know if this has also been temporarily blocked off by protesters) 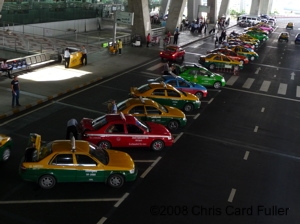 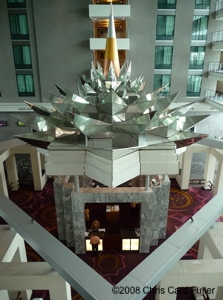 This is by no means your typical airport hotel – but unabashed luxury. Part of the French hotel chain Novotel/Accor, you will find that the meals in the three restaurants are sumptuous – and reasonably priced. You can choose from Thai, Japanese, Chinese or a huge nightly buffet. During the day, the hotel is practically deserted because so many hotel guests are in transit – which means you have the swimming pool, sauna and steam room practically to yourself. In-room massages are a possibility. The rooms are spacious and the beds inviting. 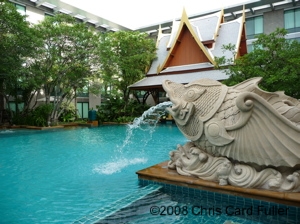 The staff will treat you as if you’re a VIP. There are always security staff on hand. If you were headed to Paris to spend your honeymoon, this is a good place to start celebrating. Spending an extra day or week here is a delightful indulgence. You could very easily spend a week here in comfort (and hopefully security), head into town with a driver or just do day-trips outside of Bangkok. 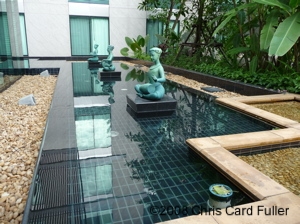 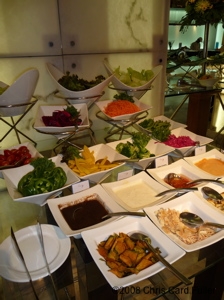 Bouygues has a reciprocal service with the Thai Cell phone service which allows for calls back to France!

Arriving in Paris via Bangkok

The Air France flight from Bangkok arrives in one of Charles de Gaulle’s newer terminals, 2E. The first thing you’ll notice is that French immigration no longer requires visitors to fill out a landing card (unlike Bangkok which demands a landing and departure form to be presented to a customs agent).

On the other hand CDG’s new terminal wings 2E and 2F lack the fluidity that a first time visitor would like have at international arrivals. You will definitely feel like you’ve walked for miles before you get to your first passport check. And at 5 am in the morning, there may be very few greeters to show you the way (unlike Bangkok international).

If you arrive at Terminal 2E, the best thing to do is to keep following the signs for ‘Baggages’. After taking numerous escalators, you’ll find yourself at a shuttle station which will you’ll take, and exit at ‘Baggages’. The ‘Baggages’ signs will invariably bring you to customs where you can present your passport and proceed to picking up your checked luggage.

If, after taking this circuitous route, you’re wondering what was in the minds of the airport designers, you are not alone. Compared to Suvarnabhumi International which uses the ‘straight shot approach’, I keep asking myself, why can’t European airports work some logic and cohesion into their layout?
There are some other weird features about Terminal 2E: A separate floor for ‘toilets’.

When you are arriving at 2E for a departure, you will discover that you need to take an elevator or an escalator up one level from the lobby for a floor that is only used for toilets. You can catch an Air France Car (shuttle) to Montparnasse or Porte Maillot (Arc de Triomphe) right outside of Terminal 2E
at Door 3. There ‘s a ticket booth here where you can buy a one-way ticket to Montparnasse for 15 Euros (or you can also purchase your ticket directly on the shuttle bus).

We sincerely hope that the Thai people resolve this serious conflict and wish that all passengers enroute to Paris or other parts of the world arrive safely at their final destination.