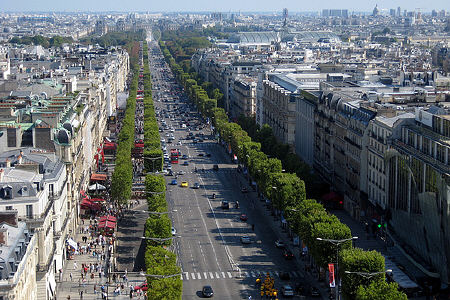 Even though almost no one outside Paris or France knows how to say or spell it properly, the Avenue des Champs-Elysees is the most famous street in all of Paris. In fact, many Francophiles consider it one of the most famous – not to mention most beautiful – streets in the world. So although there won’t be a spelling test at the end of this article (or before you’re allowed into the city), it would be a good idea for you to get to know a little bit about the Champs-Élysées before you arrive in Paris.

The full name of this grand boulevard is the Avenue des Champs-Élysées, although it’s commonly referred to as simply the Champs-Élysées by Parisians and visitors alike. The words Champs-Elysees mean “Elysian Fields,” which is a reference to Greek mythology, and refers to the part of the Underworld where virtuous souls rested for all eternity. Now, the modern-day Champs-Elysees may seem incredibly unrestful to anyone who’s attempting to cross this wide and busy avenue, but the name reflects the significance the Parisians put on this stretch of road.

Because the Champs-Élysées is only just over 1.25 miles long, it’s possible to stroll the length of it easily. And because it’s lined with countless boutiques, department stores, cafes, restaurants, and movie theatres, it’s also quite possible to spend a day (or several) shopping and dining along the avenue. You’ll find some of the storefronts cater to a more touristy crowd, but you’ll also find lots of high-end places that charge a fortune for either a bite to eat or a souvenir. The rents along the Champs-Élysées are so high, they’ve got to make their money back somehow, right?

One end of the Champs-Elysees is marked by the famous Paris monument, the Arc de Triomphe, and the equally-famous and seriously crazy traffic circle that surrounds it. The other end of the boulevard is the Place de le Concorde and its enormous obelisk. During the Paris Christmas season, the trees which line both sides of the Champs-Élysées are strung with lights, so even though it’s still full of cars speeding by the avenue can take on a very festive aire. If you’re in Paris on Bastille Day in July, you would do well to grab a spot along the Champs-Élysées to catch the biggest military parade in Europe. And sports fans may recognize the Champs-Elysees as the now-traditional final stage of the Tour de France each July, with the awards ceremony being held on the avenue as well. 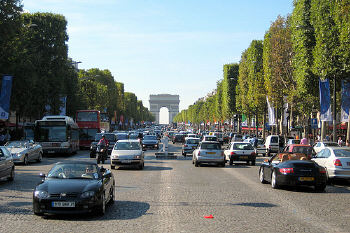 No visit to Paris can be considered complete without a walk down the famous Avenue des Champs-Élysées – just take this word of caution: If you’d like one of those iconic photographs of the Arc de Triomphe from partway down the avenue, be sure the photographer has a spotter on the lookout for oncoming traffic. The crossing signals aren’t nearly long enough to set up a nice shot, so get a quick snap and run!

both original photos by: wallyg